You Lost Your Gig For Being Stupid 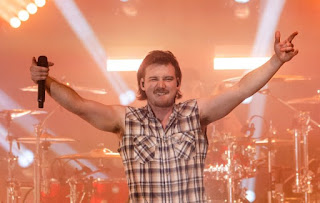 I don't know why I have to even write this, but if you do stupid shit in public, you can lose opportunities that would help you bring your music to people who don't know who you are:

Country artist Morgan Wallen has been pulled from his forthcoming performance spot on Saturday Night Live after videos of him at bars and parties without a mask went viral.

Over the weekend, videos surfaced on TikTok of Wallen Tuscaloosa, Alabama at bars and a house party, without wearing a mask. One video also showed him kissing someone who had their mask around their neck.

Wallen should be given a second chance. I don't have a problem with Saturday Night Live doing what it felt it had to do to act on behalf of the greater good. Artists who set a poor example in the public sphere have to feel the sting of lost revenue now and then. There's a reason why you hire a manager when you're trying to negotiate this sort of thing--you have to listen to someone who isn't afraid to tell you that you're full of shit.

I think Wallen heard from someone who gave him spectacularly good advice:

“I’m not positive for COVID, but my actions this past weekend were pretty short-sighted and they have obviously affected my long-term goals and my dreams,” he said.

“I respect the show’s decision because I know I put them in jeopardy, and I take ownership for this.”

No idea if Wallen has the ability to move past this and continue onwards and upwards. No idea what kind of artist he is, and I'm not going to make a value judgement on his music or his ability to entertain. In order to be considered for Saturday Night Live, you have to be ready, music business-wise, to handle an immense amount of public attention and be ready to sell music.

The impact of a performance on a program like that is one that cannot be ignored. It can bring you an avalanche of sales and might mean the difference between a tour where you're playing theaters instead of small venues. It can also break you and humiliate you.

If there's a moral to the story, it's this. Wear a fucking mask. It could save your life and the lives of the people around you.