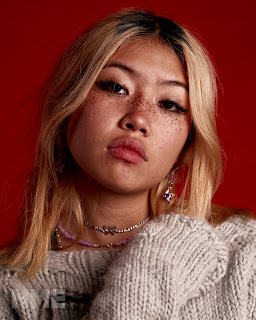 There is nothing retro, fake or contrived about Beabadobee:

Two years ago, Beabadobee released ‘Coffee’, a spindly tale recorded in her bedroom in London. Armed with an acoustic guitar and a love for lo-fi heroes Daniel Johnston and Elliot Smith, its lullaby melodies and sweet lyrics of devotion (“I like it when you hold me tight”) depicted an attempt to abate the roughest of hangovers. The results are fairly unremarkable, a tentative display of the diary entry songwriting the teenager was beginning to explore.

Earlier this year, a dreary TikTok-favoured remix by Canadian lo-fi artist Powfu – in which he samples the twee chorus – brought the song and 20-year-old Beatrice Kristi to a wider audience; it was played a reported 4.1 billion times in March 2020. But the mantra for Bea has changed. No longer satisfied with playing it understated or the idea that her voice should be subdued, she’s got the guitars plugged in, the drums heavy and the influences outrageously blatant. As she put it at this year’s NME Awards: “We need more chicks on stage.”

The timing has been fortuitous. Finding inspiration in the home environment is now commonplace for the foreseeable future, but last year’s gnarly ‘Space Cadet’ EP saw her embrace her inner rock star beyond air guitaring in the bedroom mirror. The unashamed ‘I Wish I Was Stephen Malkmus’ saw her pay her dues to the Pavement frontman, while Sonic Youth got a stylistic look-in (though no name check) on ‘She Plays Bass’ and ‘Are You Sure’. A handful of headline shows – one had enough ticket requests to fill Brixton Academy, not the 150-capacity upstairs room of the London pub in which they were actually held – saw her capitalise on the hype, as did arena support slots with Dirty Hit label mates The 1975.

Getting five stars from the NME is still a big deal so that's why I wanted to highlight this brand new artist. Music is about looking forward and looking for new artists. It's great when your favorite band from thirty years ago gets a chance to put out new music. It's even better when you can mix all that in with someone who is a legitimate artistic talent.