John Fogerty Explains Why Trump is a Fortunate Son 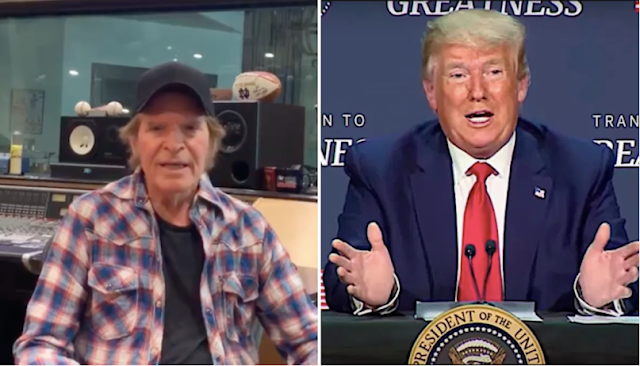 The advance people who work for Donald Trump are extremely stupid and know nothing:

[On] September 10th, Donald “Bone Spurs” Trump held a campaign rally in Freeland, Michigan. He de-planed to Creedence Clearwater Revival’s anti-war classic “Fortunate Son”, and if you’ve ever paid the tiniest bit of attention to the lyrics, you’ll agree with singer John Fogerty that it’s a “confounding” choice.

The moment was recorded in a tweet by Washington Post reporter Dave Weigel, who called it “an entry for the ‘nobody listened to the lyrics’ hall of fame.” The tweet quickly went viral, and today Fogerty issued his response. In a Facebook video called “Meaning behind Fortunate Son,” the legendary rocker broke things down so even a very stable genius could understand.

In Fogerty's own words, the comparison is devastating:


“The very first lines of ‘Fortunate Son’ are, ‘Some folks are born made to wave the flag, ooh their red, white and blue. But when the band plays ‘Hail to the Chief,’ they point the cannon at you.’ Well that’s exactly what happened recently in Lafayette Park. When the President decided to take a walk across the park, he cleared out the area using Federal troops so that he could stand in front of St. John’s church with a Bible. It’s a song I could’ve written now. So I find it confusing, I would say, that that the president has chosen to use my song for his political rallies, when in fact it seems like he is probably the fortunate son.”

There's nothing ambiguous about a John Fogerty song. He lays it out for you. The idiot who played that song before the Trump rally, thinking it would stick it to the libs has to be some sort of unwitting resistance fighter. That's the only thing that makes sense, other than the fact that Trump and his ilk know nothing about American culture.

I find it striking that there aren't already a million kids packed into the open spaces of Washington D.C., demanding an end to the Trump regime. In Fogerty's day, someone like himself had to put on the uniform and be subject to the draft for a war that was opposed at home. That war had to end because the country lost the political will to continue it and this was largely due to the coffins that were coming home and the young people who protested it.

We are in the middle of a pandemic that has killed far more Americans than the entirety of the Vietnam War and yet, here we are in relative comfort and security, watching our democracy die before our eyes. There are protests being met with the most severe repercussions imaginable and this has not caused more people to step out into the fray. Trump is driving people away from the political process by making it as sickening as possible.

I have to believe that the votes will be there in November. To consider any other possibility is too difficult.