David Byrne is Not Racist 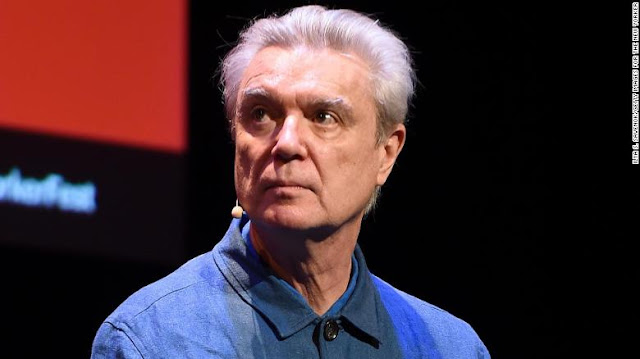 I am not a huge fan of what David Byrne did to Chris Frantz and Tina Weymouth when they were in Talking Heads. I am pretty sure that I fall on Chris and Tina's side of things when it comes to how they experienced David's unique form of human interaction.

However, I will defend David from any charge that he is racist. I'll take up that cause any day of the week.


Former Talking Heads frontman David Byrne has apologized for wearing black and brownface in an unearthed promotional video, calling it a "major mistake in judgement."

In the clip for the rock band's concert film 1984 "Stop Making Sense," the star is shown interviewing himself, while donning black and brown face to impersonate several non-White people.

The 68-year-old musician took to social media on Tuesday to express his regret after the vintage clip resurfaced online.

"To watch myself in the various characters, including black and brownface, I acknowledge it was a major mistake in judgment that showed a lack of real understanding," he wrote in series of posts shared on his Twitter page.

"It's like looking in a mirror and seeing someone else -- you're not, or were not, the person you thought you were."

Virtually every attempt to wear black or brown face is reprehensible and ignorant, and so I commend him for apologizing. In the context of Stop Making Sense, this was an inclusive set of songs that traversed multiple genres of music, much of it steeped in other cultures. You could criticize them for appropriating those cultures, but you'd be wrong. Talking Heads brought people onto the stage with them that would normally have been excluded.

I think what David was going for was a more inclusive, shared experience that was meant to bring people together to enjoy things they would not otherwise have been exposed to. We know from Chris's book that the band added musicians so that they could bring in a wider audience and make what started out to be four white people playing an eclectic mix of musical genres into a truly integrated and inclusive experience. There is no punching down here.

And it is true that he was and still is a person with quirks and strange ways of behaving and interacting with people. I'm not a doctor, so I'm not going to speculate on that. I know what has been written about him, and I don't think that's the way to frame this. What I think is more true is that there was no harmful intent, no desire to render another group of people as irrelevant or to make it so that they are no a part of the songs or the presentation. This seems like an awkward effort to elevate and hear other voices and not much more than that.

Now, will people forgive him for it? I sure hope they will and I know there are other artists who need to have this reckoning.
- September 02, 2020