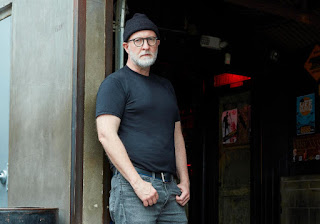 Blue Hearts is the new album from the great Bob Mould and he makes one hell of a resistance fighter:

“All I have to do is wake up in the morning and take a look at what’s happened while I was sleeping — that’s enough to scare me every day into saying something,” Mould tells SPIN.

His outrage is especially potent on single “American Crisis.” He wrote the song two years ago during the sessions for his previous album, 2019’s Sunshine Rock, but decided it was too dark to fit that project’s more optimistic outlook. However, the track felt too relevant to pass over again.

“American Crisis” reminded him of being a young musician trying to figure out his identity in the early ‘80s. While not normally one for nostalgia, Mould has been in a particularly reflective state: He recently helped compile the 24-CD box set Distortion: 1989-2019 (out Oct. 2), which chronicles his 30-year post-Hüsker Dü career, including his work as a solo artist and a member of influential alt-rock band Sugar.

How many artists are putting out 25 CDs worth of music this year?

Everything that I've heard so far is classic Mould. The power and the prestige that he brings to a straightforward protest song is enough to make you want to venture out into the world and wave a sign in some asshole's face. This is the energy we need right now and this is the moment for definitive statements. You can't sit on the fucking fence anymore. You have to get engaged and you have to start giving a shit about the world. Bland resignation and indie hipster detachment is what put us in this place to begin with.