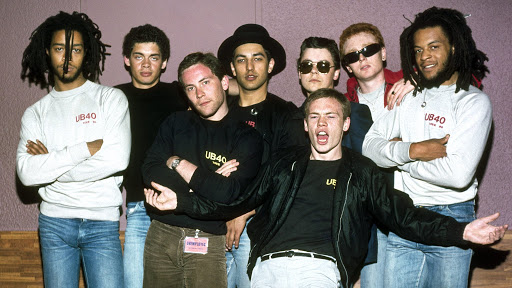 If you read this article, you'll learn a lot about UB40. Currently, there are two competing versions of the band that will never be reconciled. And anyone who says that they got into a fight with Ali Campbell is a lying jackass.


Which controversial Supreme Court judge allegedly got into a fight after a UB40 gig in 1985 with an Ali Campbell lookalike?

“I can’t remember his name. Are you on about the American who thought he was having a fight with me after a concert? It’s complete nonsense.”

WRONG. It’s Brett Kavanaugh who, as a college student, was reported to be involved in an altercation with a man some thought was you.

“That’s him! It’s just bollocks. I don’t go for drinks across the road after a show (Laughs). I’m back at my hotel. And you know, I would have battered him anyway!”
Any other memorable false stories involving you?

“After UB40 played the Montreux Jazz Festival once, the newspapers reported that us and Depeche Mode had gone on a boat that sunk. Robin [Campbell, guitarist] was quoted as saying: ‘And then the rest of the band jumped in to save the beer’, which wasn’t true. I couldn’t see us hanging out with Depeche Mode back in the day.”

It's that same old story. Start a band with your brother, have a falling out, never get back together.
- August 13, 2020