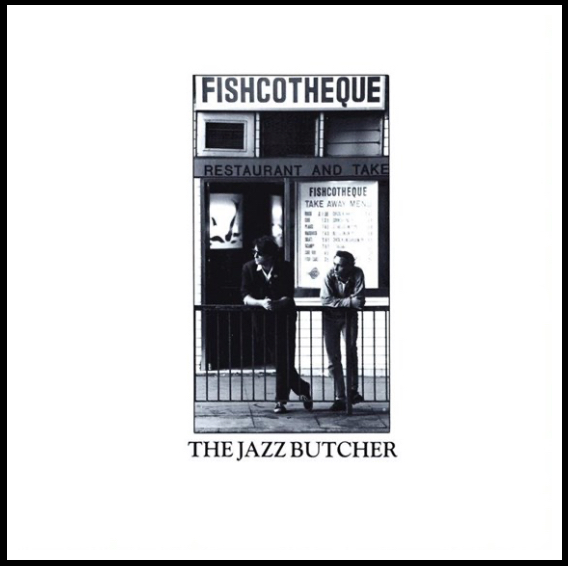 The Jazz Butcher see their Creation Records era albums released on this thing called vinyl for Record Store Day and this is a good thing. Any release of Fishcotheque into the main stream is worthy of words and links and things.

IN an of itself, re-releasing records like this allows for a new generation to be exposed to great music that was consumed in the 1980s. This particular record was a late-1980s miracle and a stunning reinvention of the loose and shaggy band that crawled out of Northampton. No longer using Max Eider's guitar and not content to just conquer the world, this was essential listening.

Having ended up on Creation Records, which I took as a bit of a validation, I was keen to get as far away from all those "w" words that had followed my group around, and to make it as clear as I could that this was a rock & roll thing, not some "eccentricity". I had my shades and I had my fringed suede jacket and I had the Weather Prophets rhythm section.

In the last flickering days before Marriage and Acid House would change the world Kizzy and I hung out in his dealer's flat in Islington and WALKED to the studio in Waterloo everyday. The sessions were chaotic and funny. At one stage Kizzy arrived 56 hours late for a mix, having been held by the Police under the Prevention of Terrorism Act.

David has this down right as a sort of self-justificatory thing. What disappoints me is that it came out sounding so SMOOTH and tidy. I'd hoped it would be more harsh and mad. I guess perhaps it's the saxes, which, I recall, enraged some reviewers. Sonic Boom does good things on Susie (that's 4 of them big ballads at least, now), that was more the idea. Still, not to slag O'Higgins, who began a lengthy association with the JBC on this recording.

This sold rather well, which was pleasing, and seems widely liked. I can't fuck with that, but I had hoped that it would be more a "change of direction" than it was. But I like Fishcotheque; I wish there more records as good as it.