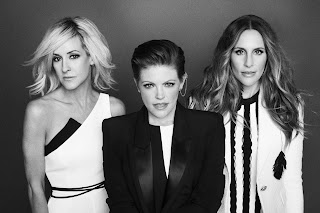 This one has me stumped:

A journalist has written an op-ed in which he examines negative racial connotations with Dixie Chicks‘ name, saying it’s “the epitome of white America.”

Jeremy Helligar has asked whether it’s right for the country band, who are set to release their comeback record ‘Gaslighter’ on July 17, to keep using the name – particularly in the current context of the fight for racial justice.

My initial reaction is that there is no better ally for people who are being oppressed than the Dixie Chicks. They risked their careers in order to condemn war, the Bush Administration, and domestic abuse, among many other things. They were pretty relentless in their advocacy of decency and treating women with respect and dignity. They suffered heaps of abuse for not "shutting up and singing."
So, no. They don't need to change their name. In fact, they probably need a wider audience and a fucking Presidential Medal of Freedom for each one of the band members.
UPDATE: They changed their name to "The Chicks."
- June 18, 2020