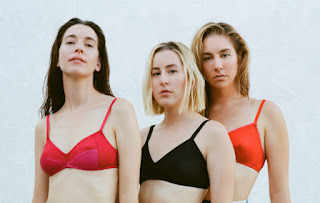 I never understood and I never cared for Haim and I don't care about anything they do.

“The whole mantra of this record is about being fearless and not holding yourself back,” Alana Haim told NME last year. At the time, Haim – completed by her sisters Danielle and Este – had only released two songs from their third album (‘Summer Girl’ and ‘Now I’m In It’) but you could sense from that pair’s disparate stylings and sensitive, unguarded subject matters that the LA band had stuck to that idea.
Some seven months and one coronavirus-induced setback later, ‘Women In Music Pt. III’ is the result of that approach – one that’s brought about Haim’s best album yet. It’s bold and brave, but delivered with such confidence and chill that it doesn’t feel like a risk. It captures everything that the world knows and loves about the LA group – their nods back to classic rock, harmonious vocals, and breezy way of being – but throws in some new, surprising twists.
On the follow-up to 2017’s ‘Something To Tell You’, they regularly push themselves out of their comfort zones, experimenting with glitchy electronics (‘I Know Alone’), slatherings of sax (‘Summer Girl’), and dubby syncopation (‘Another Try’, which feels like a sparkier sibling to Lana Del Rey’s cover of Sublime’s ‘Doin’ Time’). Between all of the new, though, the sisters are still experts at deploying irresistible rock, like the rousing, shout-a-long brilliance of ‘The Steps’.

Plenty of people probably disagree with me but I don't care. The world is not all sunshine and roses and I don't have to like your band. In fact, me being unreasonable from time to time helps me make sense of a world where they're going to market a band with three sisters in it by showing them to everyone in their bras or what purports to be some sort of bra but could be a choice made by a consultant hire by the record label.
I like plenty of bands with women in them and all they do is play music. I don't need to see Sleater-Kinney or anyone else decked out like this and exploited by music bros. The songs are fucking derivative and annoying and I think that's what pisses me off the most. I don't actually care what Haim looks like and neither should you. But, Goddamn, what a bunch of hyped up bullshit.
This is what it sounds like when the worst poseur gets an idea and turns it into a family band. And yes, I fucking hate Kings of Leon why do you ask?
Sometimes, you just have to have an irrational opinion and this is one of them.
- June 15, 2020