Back For More Cash 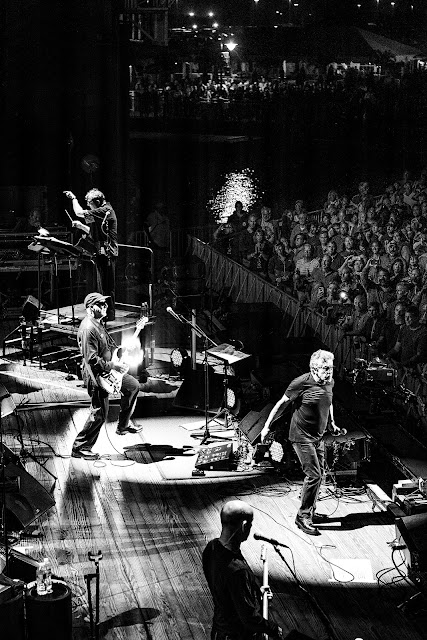 The Who are back for more cash:

The Who’s current shows feature two video screens full of vintage shots of mad, mad Moon and Entwistle in his bemused and haunting solitude. I asked Townshend if he ever got nostalgic looking up at the pictures of his fallen bandmates. He snorted like an old horse.

“Because they were fucking difficult to play with. They never, ever managed to create bands for themselves. I think my musical discipline, my musical efficiency as a rhythm player, held the band together.”

Townshend took on his bass player first. “John’s bass sound was like a Messiaen organ,” he says, waving his angular limbs. “Every note, every harmonic in the sky. When he passed away and I did the first few shows without him, with Pino [Palladino] on bass, he was playing without all that stuff…. I said, ‘Wow, I have a job.’ ”

He was not finished. Moon is an easier target; he once passed out during a 1970s show in San Francisco, forcing the band to pull a drummer out of the crowd. “With Keith, my job was keeping time, because he didn’t do that,” says Townshend. “So when he passed away, it was like, ‘Oh, I don’t have to keep time anymore.’”

Email ThisBlogThis!Share to TwitterShare to FacebookShare to Pinterest
Labels: Music

About the Young Idea

I wouldn’t say that I forced myself to revisit The Jam’s In the City Album, but it definitely didn’t come up in polite conversation. I was looking around for that immediate, urgent sound to drive around with and this is an album full of impatience and necessity. It’s the sound of a young man finding an outlet for anger and creativity and the rock and roll aesthetic that never goes out of style.

There are better songs by The Jam and there are better debuts. You can work you way through this or you can indulge in All Mod Cons and Sound Affects, which are the two that always show up for me. This is the Modern World is not as good as In the City, but that’s a matter of taste. I’m less enamored with Setting Sons and The Gift, if only because they seem like lost opportunities to me.
There are compilations that are ready-made to bring you the songs that make up their catalog. I had a knock off compilation for years, and I had a mini-LP of their covers. There is a ton of product out there. But, for me, it all comes back to what I think is the greatest greatest hits album of the post-punk era.
Snap is one of those essential items that can dip you into their sound and keep you paying attention (and it deserves its own telling). By the time I start that with In The City and get to Town Called Malice, I’m always bummed because there should have been decades of that stuff. I love Paul’s approach, and I appreciate the Style Council and his solo works, but, damn. It’s hard to not feel cheated.
In the City is one of those neat, perfect things that encapsulates what the whole game was about. Come up with some songs, play them live, and put it on tape. I suppose you could look at the mammoth 1977 box set that came out a few years back and just consider it all the birth of a band you just can’t ignore. after all of the other compilations. I’d be leaving out half the story if I failed to consider the band’s live output, and all it covered a scant six year period of frenzied activity. No wonder Weller ended it all.
I always come back to the classic track Away From the Numbers, which is as good as anything anyone ever did. You can’t ignore how good Rick Buckler and Bruce Foxton were, either. No one should minimize the fact that their impact on these breakneck songs was as important as that soulful howl that Weller would emit at all the right times.
All you have to do is write ten songs and stick a serious cover (Slow Down by the great Larry Williams) and then a silly one in there (Batman got on my nerves, he was a fucking asshole), and you’ve got an album. That’s it. And yet, no one has really managed to do it quite like this. The lid is still torn off the place, and there is no Jam to put it back. Now you know why it started and why it ended.
- November 09, 2019 No comments:

We're Only In It For the Smashed-Up Hotel Rooms

What’s the big deal? As long as your record label has to pay for the damages, who cares what ends up in the swimming pool after midnight when you’re a rock star on the road?

Pete Townshend has spoken about his regrettable “rock and roll” antics.

The Who guitarist and singer, who used to smash up his instruments on stage, said such behaviour was “a waste of time” despite it helping to get people to listen to his band.

The 74-year-old musician told The Big Issue magazine: “I was always pretty snobby about rock and roll.”

He addressed an infamous incident in which the band’s late drummer, Keith Moon, chucked a TV through a hotel window. “As the television went through the window, I would look at Keith Moon and go, ‘what a fucking prat. What a waste of time’.

“Then, two or three times I did the same thing and I would think, ‘what a fucking prat’.”

Townshend conceded, however, that it caught music fans’ attention. As a former arts student, he said that he was “in it for the art”.

“Getting into auto-destruction was straight out of art college. People still say that I should never have smashed instruments,” he said, before concluding: “Fuck off. It is how I got you to listen to me.”

I have a hard time believing any of that stuff matters any more. It was used to hype things, certainly, but if the songs weren’t any good, you would have forgotten The Who just like you’ve forgotten so-and-so and the also-rans. Being a terrible guest with violent tendencies at a hotel or being careless with a guitar on stage is just part of the fun.

At the end of the day, how many guitars got smashed? How many really good ones? And how many $50 throwaway guitars actually ended up being trashed while the good ones were spirited away before the end of the gig?