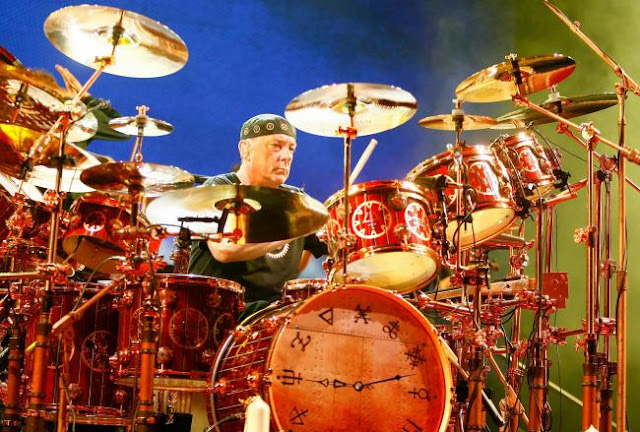 Rolling Stone is as useless as you remember when it comes to ranking things:


When Neil Peart auditioned for Rush in 1974, his bandmates heard in him a chance to embrace their die-hard Who fandom. "We were so blown away by Neil's playing," guitarist Alex Lifeson recalled in an interview earlier this year. "It was very Keith Moon-like, very active, and he hit his drums so hard." Ironically, Peart's great contribution to rock drumming would turn out to be the exact aesthetic opposite of Moon's: the most precise and meticulously plotted percussion that the genre has ever seen. As Rush's high-prog ambitions flowered in the mid-to-late '70s, Peart revealed himself as both an obsessive craftsman and wildly ambitious artiste – traits that also surfaced in his fantastical lyrics – using esoteric implements such as orchestra bells, temple blocks and timpani to flesh out his baroque parts for songs such as "Xanadu" and "The Trees." As the band's music streamlined in the Eighties, through transitional masterpieces such as Moving Pictures and on to a more pop-oriented sound, so did Peart's playing; he began tastefully incorporating electronic percussion and looking to mainstream innovators such as Stewart Copeland for inspiration. Rush's recent work, such as 2012's Clockwork Angels, features some of Peart's best work on record: a stunning unity of brains and brawn. Meanwhile, despite his recent retirement from touring, Peart remains perhaps the most revered – and air-drummed-to – live sticksman in all of rock, famous as the architect of literally showstopping set-piece solos.

If you compare the bodies of work, Peart's output, in terms of albums recorded and gigs played, outclasses every single one of them. He has played to more people than all three of those drummers combined. He has influenced countless drummers and he has, effectively,  retired from the music business with his integrity intact.

He has even completely reinvented himself--taking late-in-life lessons to refine and improve himself when no one else would bother with such introspection. Twenty-five years ago, this is higher than Peart would have been ranked, probably. The problem with this list is that we're well past the sell-by date on Rolling Stone's influence in the popular culture. This is a nothing post because their opinion--and mine, of course--really do not matter, but oh well.
- April 04, 2016