Poison in the Air 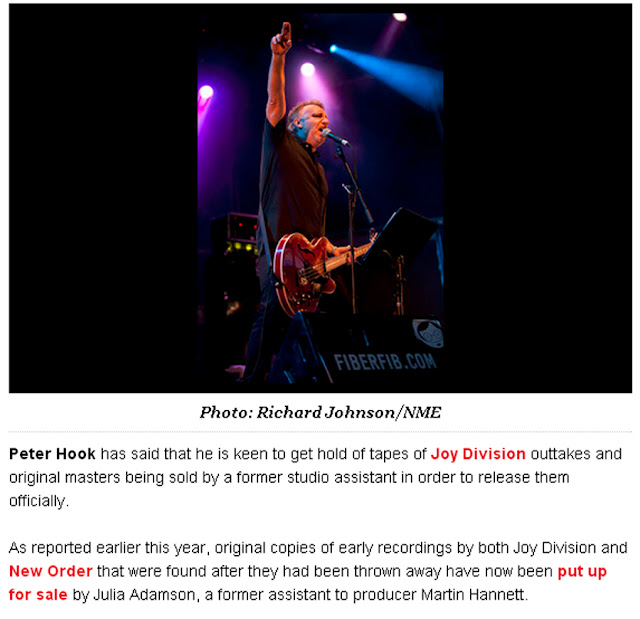 The business situation with New Order, and the people who make up that group, is rather poisonous right now and this will keep a lot of unreleased material off the market for a while. They all need to get in a room, hash it out, and find a way to divide things evenly and fairly.

Part of the problem is how Tony Wilson left Factory Records and part of the problem is old age. People get stubborn about things, and when you let a misunderstanding flourish into something else, well, what you get is a blow up and a ten year break from constructive engagement. Or more.

If there is anything on the Adamson tapes that has any real value, New Order is not the only band we're talking about here--the Psychedelic Furs also have material that was found. This is not insignificant, and it might well be a vast treasure trove of material. Box set anyone?
- August 29, 2013 No comments:

Who Gave the Bees to Bez? 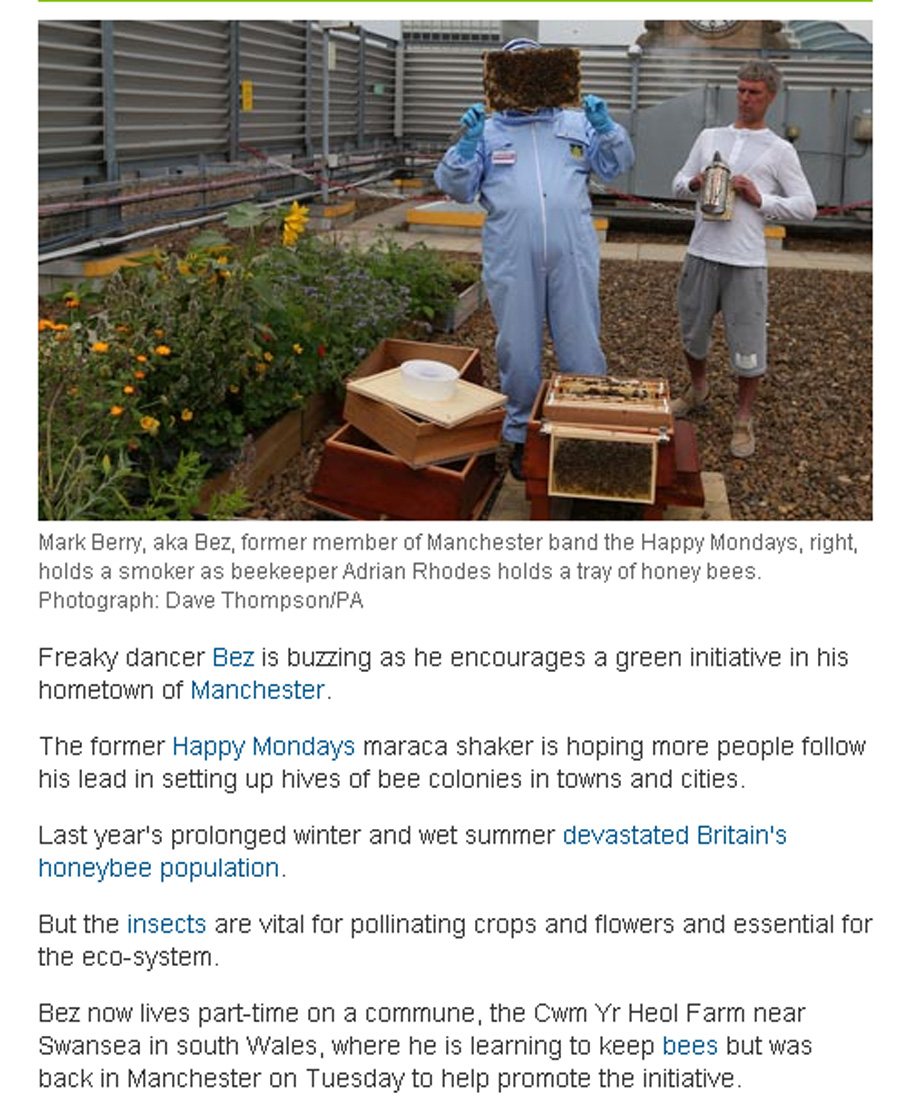 The Stone Roses had Cressa and The Happy Mondays had Bez. I would be more inclined to let Cressa have bees than Bez; if you can get high ramming bees into your ears, Bez is going to have bee guts smashed permanently into his temples by sundown.

Everything is an Ass Wiggling Contest 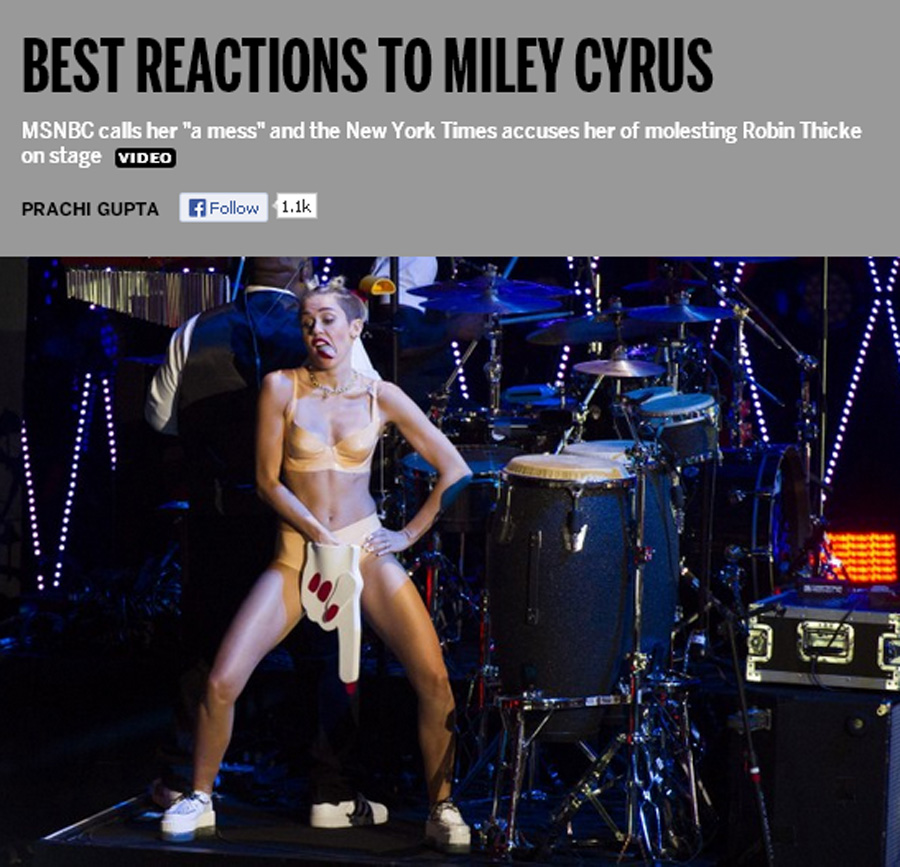 Twenty or thirty or forty years ago, Miley Cyrus would be wearing shoes that would be ridiculous. Think of the glam boots and high heels of yesteryear and how they would have rendered her incapable of gaining the traction she needs to, well, wiggle in front of people.

What did any of it sound like? Who cares?

Dan Auerbach is Taking Over the World by Being an Asshole 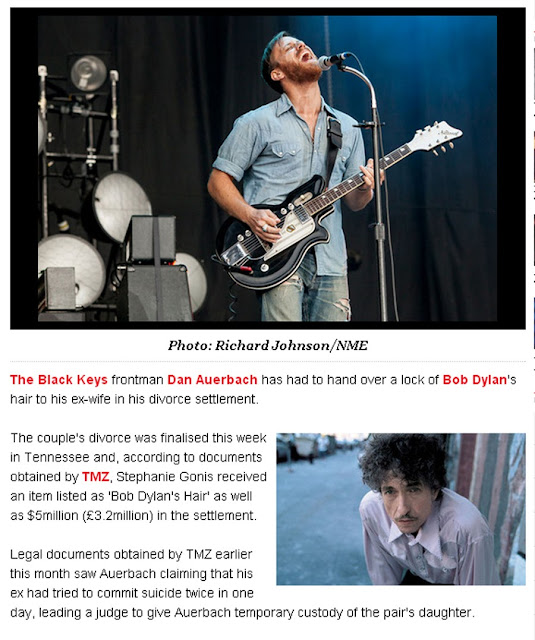 The razor-thin line between being a rock star and an asshole gets even thinner when you consider the actions of Dan Auerbach, one half of Pat Carney's outspoken band.

Auerbach lost Bob Dylan's hair in a divorce settlement recently. If that's not a rock star incident, complete with all the douchbaggery that it deserves, I don't know what it is.
- August 22, 2013 No comments:

Welcome to the Music Industry 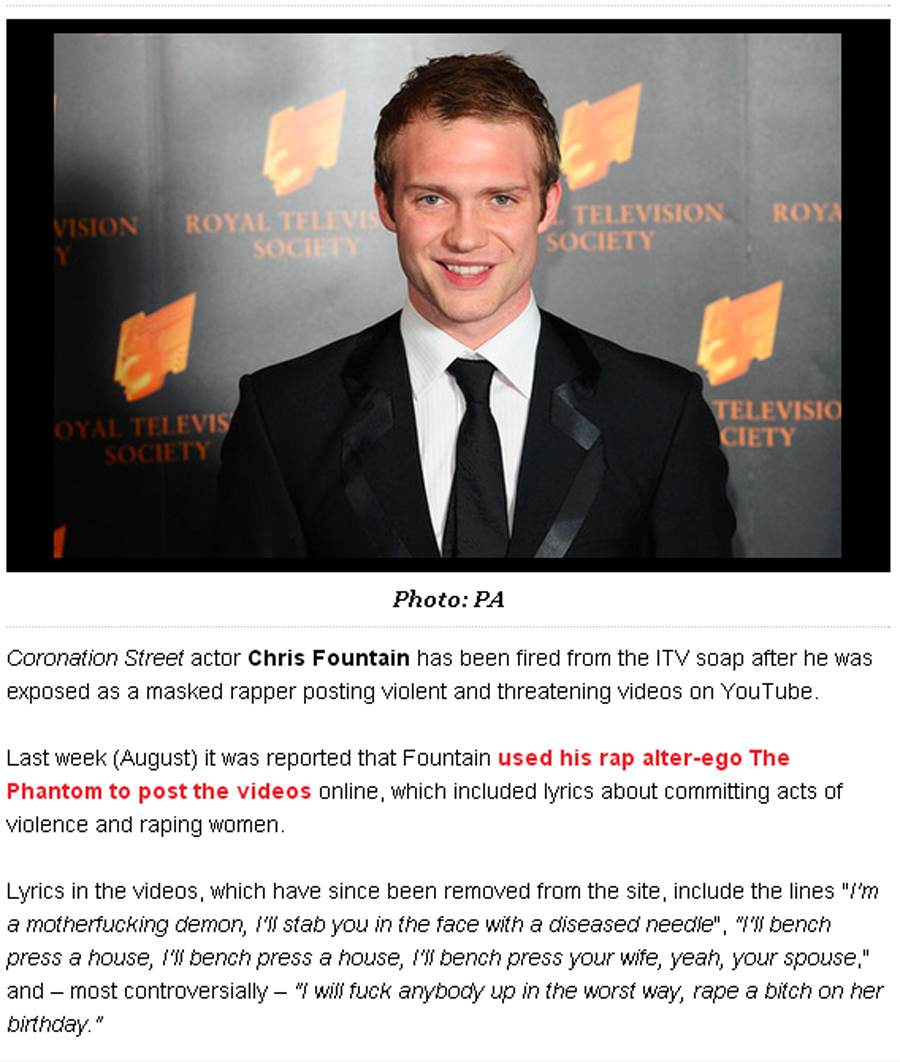 Chris Fountain is an English actor who now has more than enough free time on his hands to expand and grow his rap alter ego. As The Phantom (someone is already filing a copyright claim on that one), he can expound on bitches and their birthdays to his heart's content.

Fountain should not be censored; he should be subjected to the power of the marketplace. If legions of British girls love their white rappers to come from a melodramatic background, then let them flock to The Phantom. My guess is that they didn't care about Fountain yesterday and they don't care about him today.
- August 20, 2013 No comments:

Prince is a Self-Aware Badass 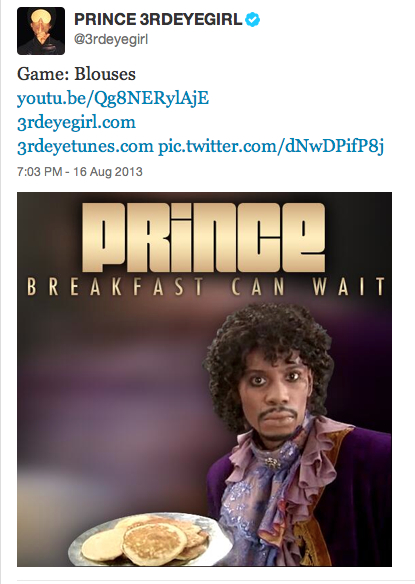 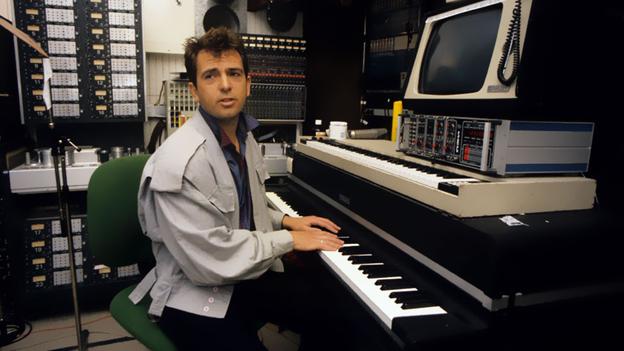 This is a BBC article about how things are going for Beyonce right now; her next album has some "issues" apparently:

The latest reports from inside Camp Beyoncé say the singer has scrapped the 50 tracks in consideration for her fifth studio album and decided to start over. Ne-Yo, one of the artists whose songs were reportedly shelved, said Beyoncé was “still trying to figure out” a direction for the album in June, according to the Hollywood Reporter. Who knows how much truth there is to these reports, because Beyoncé and her record label, Columbia Records, haven’t commented. But something’s clearly amiss.

Last February Beyoncé headlined the Super Bowl halftime and launched a major arena tour this summer. Micro-managed pop stars usually commit to that kind of schedule only when there’s new product to push. Multi-million-dollar marketing campaigns for big albums are the cultural equivalent of the D-Day Invasion – plotted months in advance to saturate media and heighten public awareness. And yet there’s still no sign of the follow-up to Beyoncé’s 2011 release, 4.

Is it fair to compare Peter Gabriel's disastrous album, Up, to what's happening with Beyonce?

The Up album was a flop commercially but it did have strong tracks and strong performances. It was not an artistic failure; the market that it was delivered into was not very accepting of what Gabriel was offering. It was dark and possessive and unhappy, and it reflected the life that he was leading. And, really, how do you follow up one of music's perfect albums, So, and not let people down? 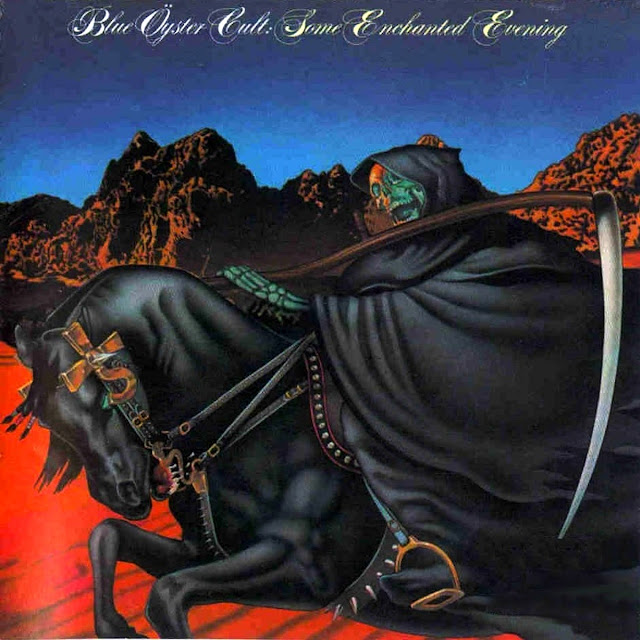 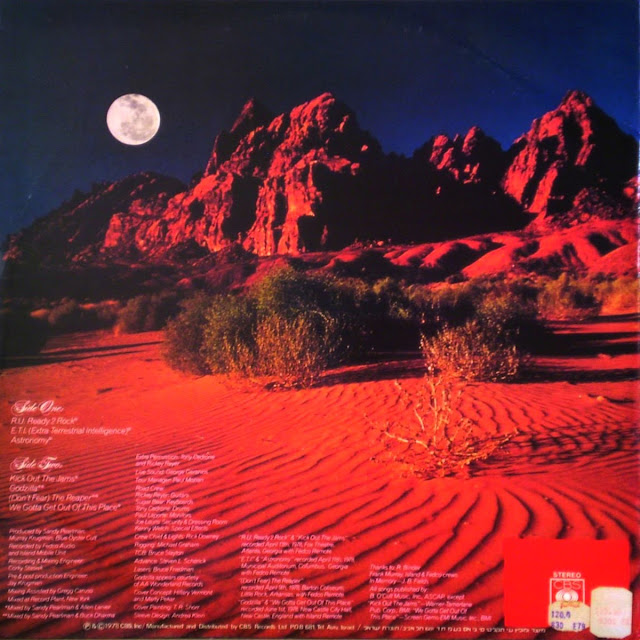 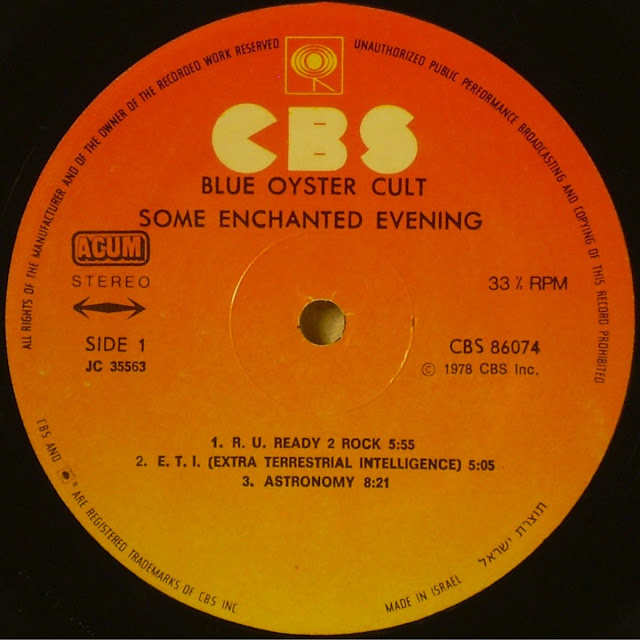 This is the album cover for Blue Oyster Cult's Some Enchanted Evening album, which was a live album that came out in 1978. Interestingly enough, it was their best selling album.

Allen Lanier passed away today, and he was responsible for much of their guitar sound.
- August 15, 2013 No comments: 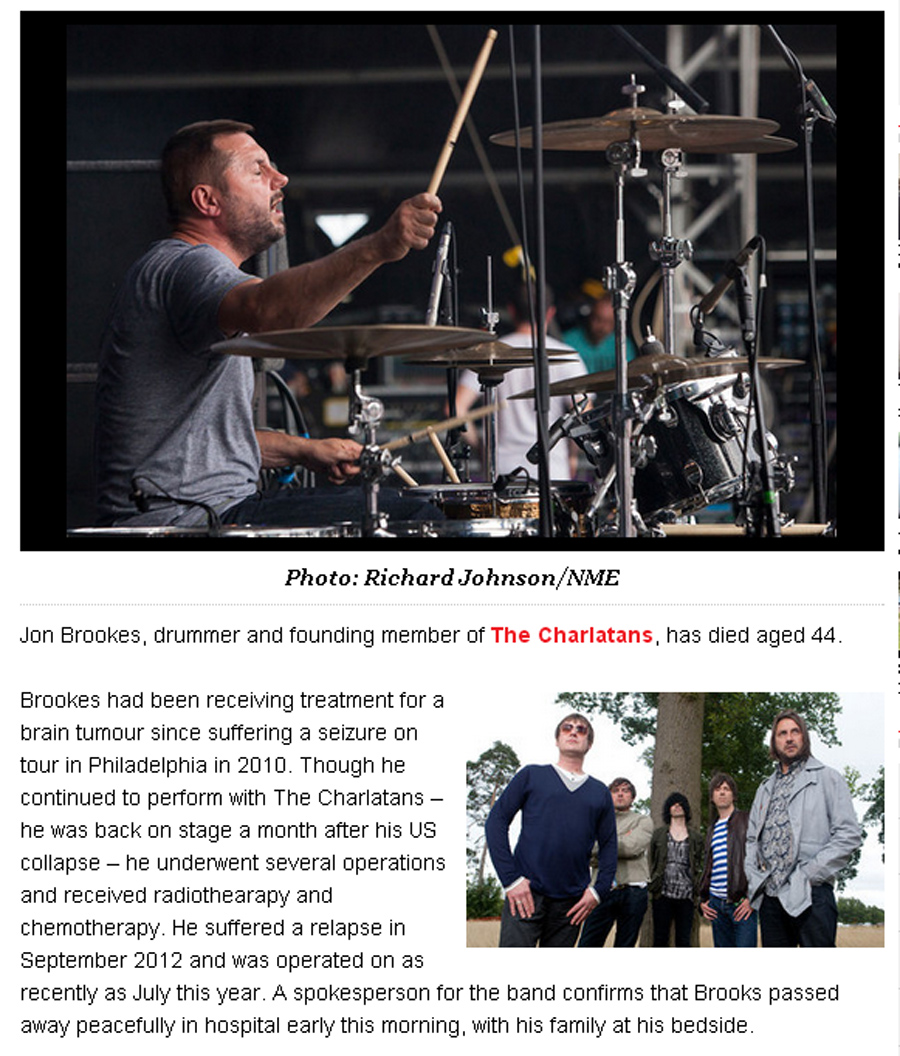 Jon Brookes was a spectacular drummer. He helped define the "Madchester" genre of music by providing a dance beat that helped propel the Charlatans well beyond their origins.
- August 13, 2013 No comments:

Johnny Marr Says Something Negative About a Smiths Reunion 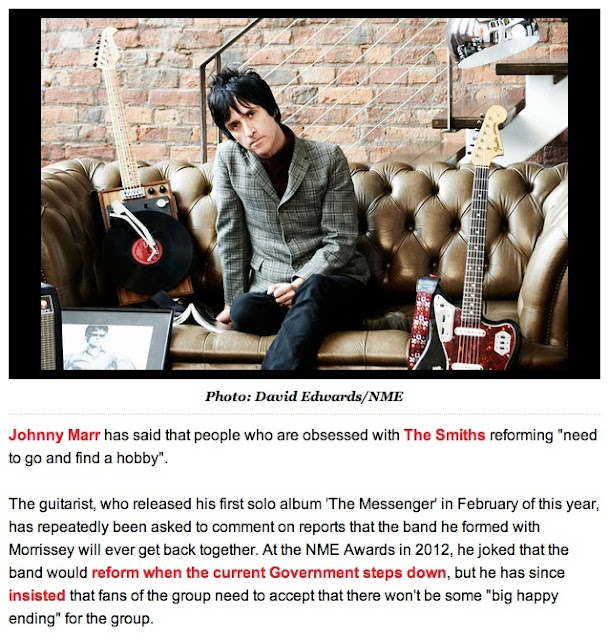 You have to hand it to Johnny Marr--he's great at throwing water on the idea of Smith's reunion. In my personal opinion, someone will come up with a number soon and The Smiths will reunite as a three piece with a hired drummer. The bad blood between Morrissey and Mike Joyce all but guarantees that the original four members will not reunite. Marr has his camp and Morrissey has his; they are still sustaining their lifestyles so there's no need, as of right now, to take the money and run. The Stone Roses just weren't that lucky.

If no one meets the price, the band will not get back together. In and of itself, this is not a bad marketing ploy. People still go to see Marr and Morrissey because they know that the band won't reform. This kind of hope maintains a fair amount of interest in whatever they're selling. Smiths fans aren't going to buy anymore of their albums because they already own them so sales are not a motivating factor. They do support new material from the two camps. That's what keeps things moving. 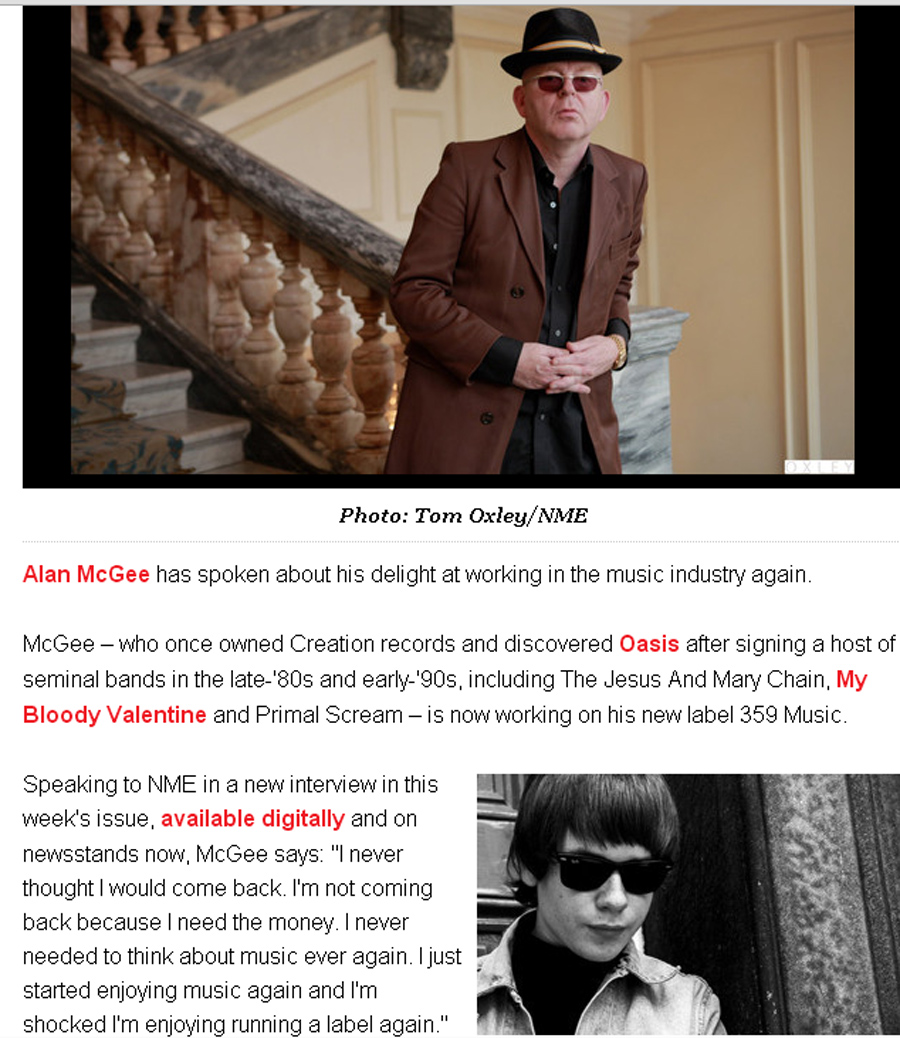 I'm shocked that Alan McGee hasn't bailed already. Has it been a month or two? How long before all of these artists see the back of him, going off with a bag full of money?
- August 08, 2013 No comments: 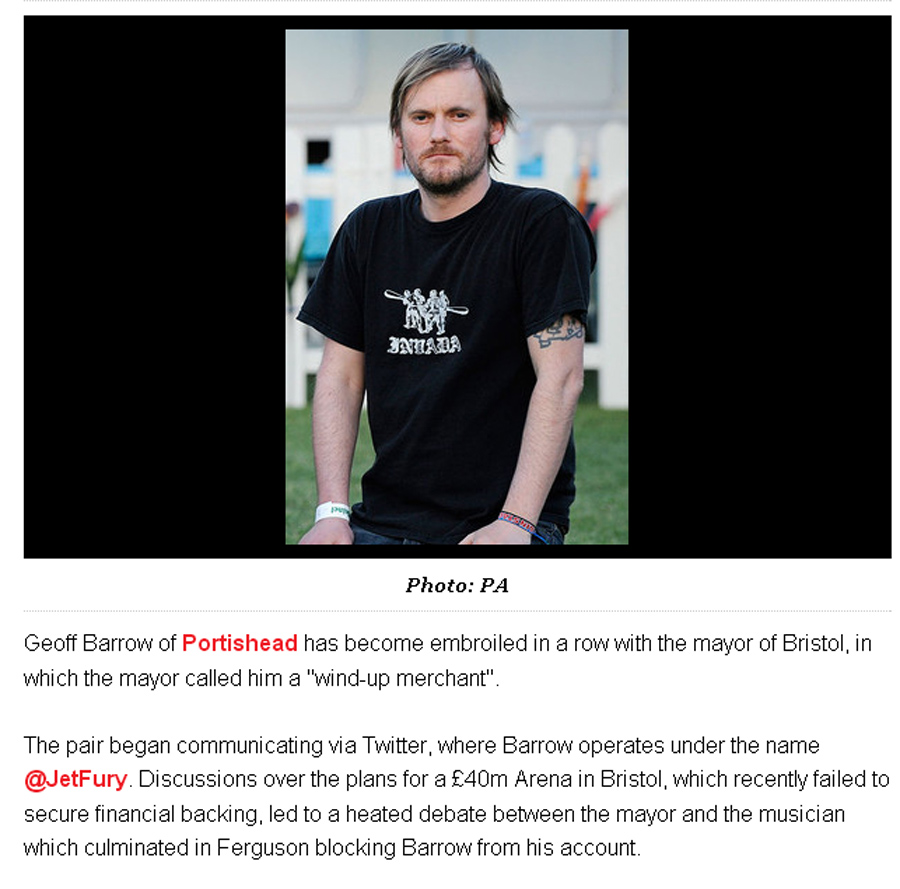 I don't see where an American artist would get involved in the issues or the politics surrounding a new arena, so this is a bit of an odd story. Geoff Barrow of Portishead has engaged the mayor of Bristol, England in a back and forth about whether or not it would be a good thing to build a new arena in the city.

Concert revenue is one of the few things that can sustain a performing act; if you can't play live, your options of surviving in the music business shrink down to nothing. So, perhaps it makes sense for artists to start paying attention to the places where they might play and to the communities that might support those venues. Being ignorant of economics is a quick way to end up being an ex-musician.
- August 08, 2013 No comments: 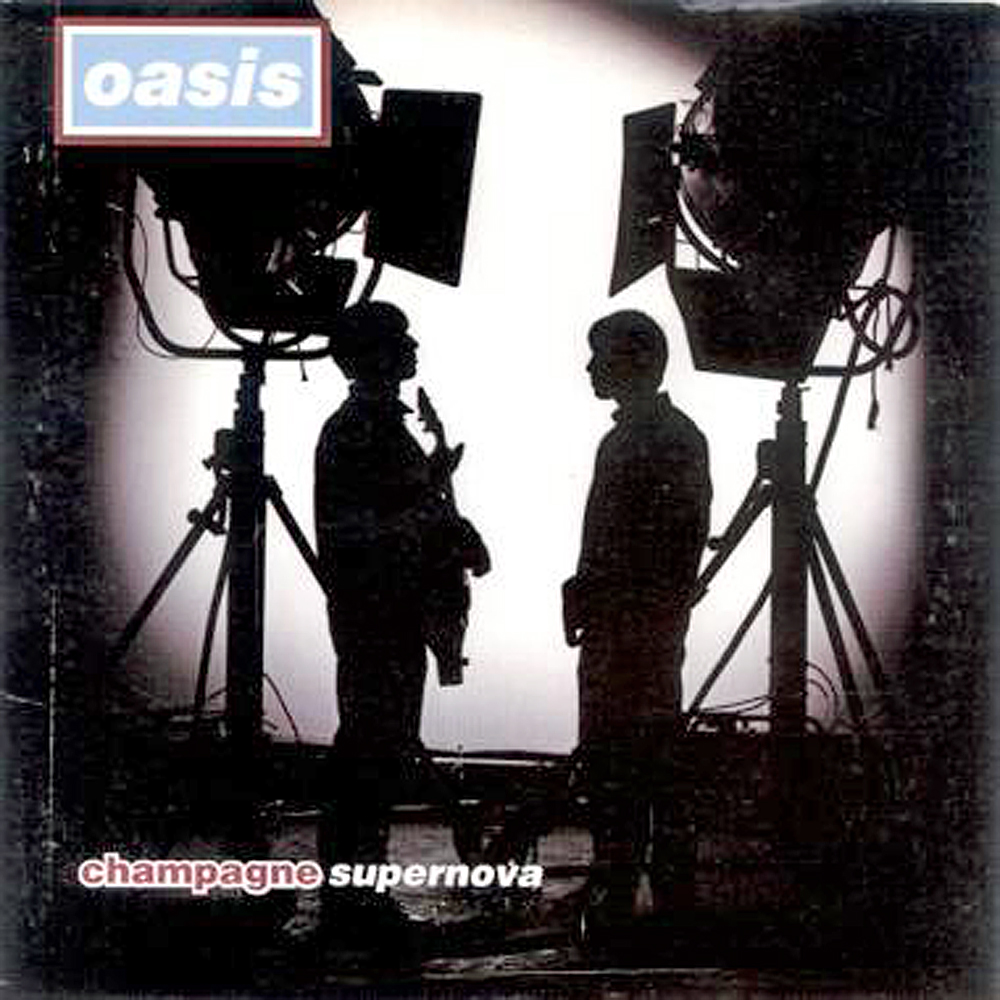 This is the cover for the Oasis single Champagne Supernova. Up until today, I don't think I have ever seen this before. I have all of the singles, or so I thought, but this one eluded me.
- August 06, 2013 No comments: 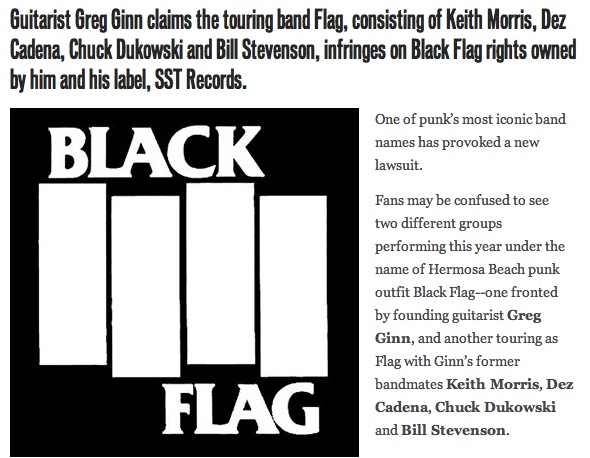 Greg Ginn is going to have to prove that his former bandmates are committing some sort of fraud by calling themselves "Flag" and touring the country. He should have no problem doing so in the court of public opinion, but the legal one might be more difficult.

Never let the guy who owned the record label get ahead of you on legal matters. Someone made a calculated decision and they may have cost themselves a great deal of money.

This is similar to what happened when the former members of Pink Floyd went out and made a "Floydian" album called A Momentary Lapse of Reason and then toured the world; subsequent to that, they defeated Roger Waters in court and were able to go back out and make The Division Bell and make even more money, playing stadiums and confusing fans.

Ginn's legal team should not cite the Pink Floyd case; Waters went on to tour the world several times with backup musicians, playing Floyd albums and selling out his own stadium tours. He was not financially set back at all; in fact, he was able to do quite well.

This will come down to what the fans will tolerate. In most cases, they simply won't pay attention or care.
- August 03, 2013 No comments:

Hating On the Opening Act 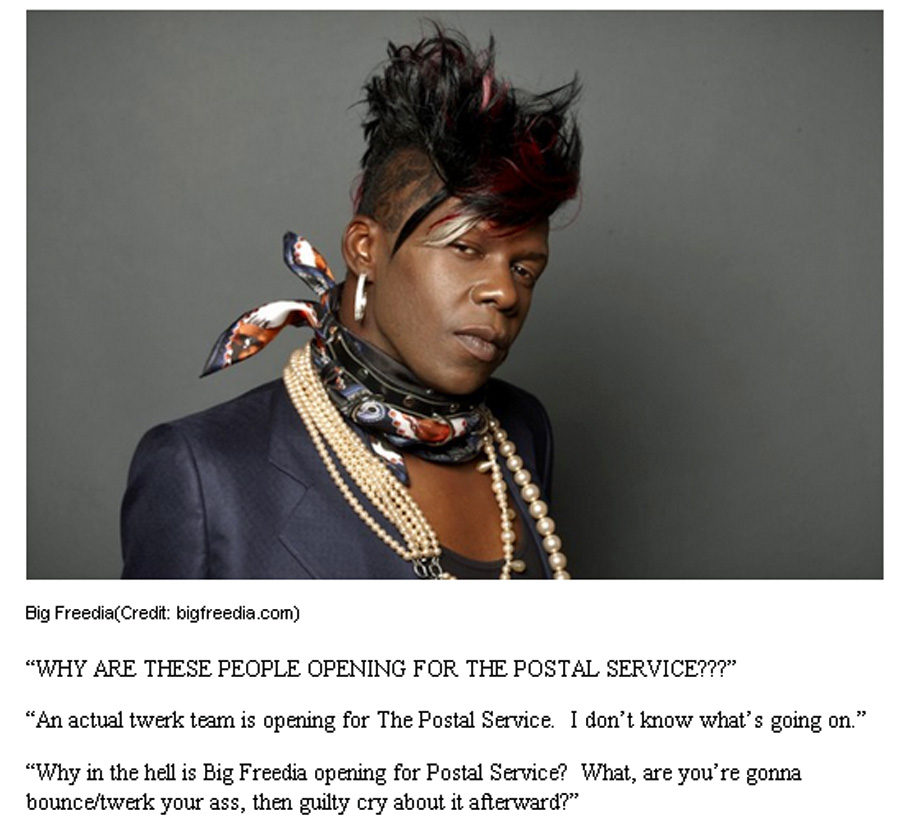 Opening acts are going to suck no matter what (unless you find that rare gem out there, which is usually an up and coming band).

There are several opening acts that I have absolutely been angry about being forced to deal with. Mr. Big was the worst opening act I've ever seen. What was that hair metal shit? The Rainmakers were boring and useless as an opening act. No one is clamoring for a Rainmakers reunion tour, obviously. I think the very first concert I ever saw and the very first artist I have ever seen play live is Gary Moore, who, in retrospect, was pretty awesome to be able to go see. The two best opening acts were Adam Franklin and Bolts of Melody and Pixies.

Yes, Pixies were once an opening act. They were fantastic. Black Francis and Joey Santiago destroyed a guitar, just because they could. They were not as good as Love and Rockets, however.

When I saw Sting play back in the early 1990s, he had one man act Minx open for him. Minx dealt with the situation thusly: he sang "I'm dreaming of a white...girlfriend." Everyone laughed and enjoyed his performance. Tension eliminated.
- August 01, 2013 No comments:

There Are Classes Among These Masses 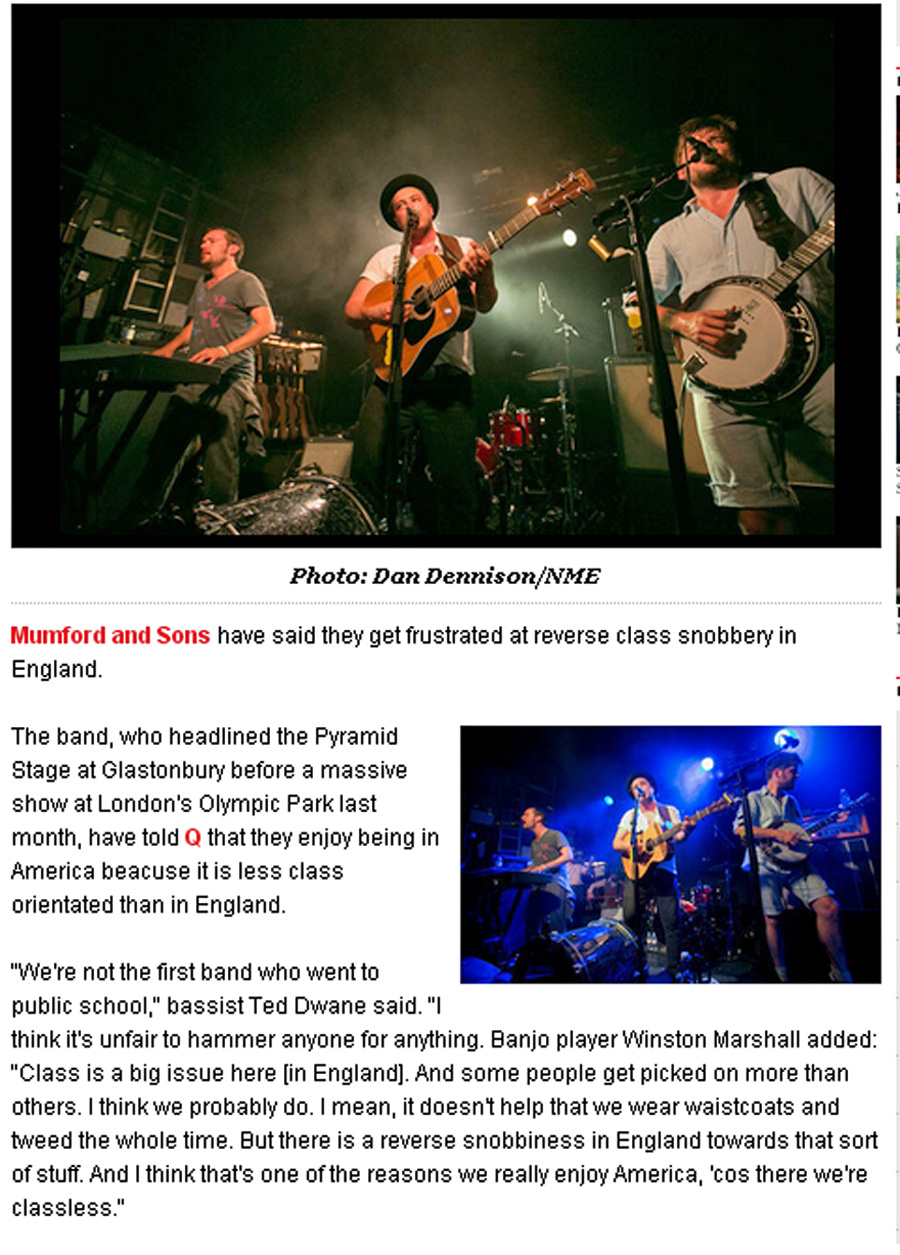 Is there class in America? Yes, and Mumford and Sons are convinced otherwise. That's because of the sheer scale of this country. British bands are routed through venues and sent packing; they rarely see much of the landscape or see the grinding poverty in towns that are not served by concert venues. If you wear tweed in America, people just think you are a professor of literature or something like that.

I don't understand the appeal of Mumford and Sons. I have given up trying to figure out why a band like that can succeed while others end up by the wayside. I certainly can't explain Radiohead to anyone; why there are legions of ravenous fans who eat up the crackly, moaning, broken glass dissonance is beyond me.
- August 01, 2013 No comments: