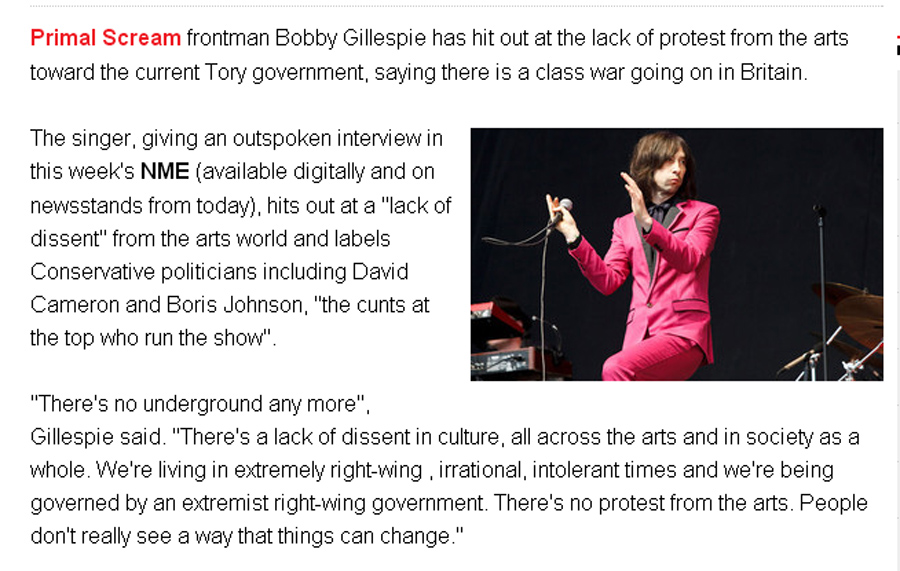 I have to agree with what Bobby Gillespie is saying here. The underground vanished with the independent labels and with the artists who could survive by playing live and selling their recordings. When the ability to steal music over the Internet happened, it killed the support mechanism that used to sustain independent and underground artists. Now, you have to be corporate friendly. Now, you have to have a website and a social media presence. How can you be underground if you have to have a blog and a Twitter account and an open line to what you hope is an engaged group of supporters. It used to be about a mailing list; now, it's about making sure you don't offend anyone.

Dissent happens when you can sustain yourself through alternative means. When you can feed yourself and your band for months at a time through a non-corporate method of playing live shows, banking the take from that, spreading out money over months at a time, and financing independent recordings that can be sold at shows--that's what has disappeared, by and large. That's what has been replaced by a need to engage and plead for support. You can't do that by being offensive or shutting down for a few months to go have a life. You can't do that if you're constantly looking to other outlets to support what shows you do get to play. Dissent only happens when you can tell everyone to fuck off.

That's what it is all about--when you can be a band and afford to tell certain constituencies to fuck off places power in the hands of an artist. Being able to give an immediate message of dissent happens when you know you have a support network that does not include having to kiss anyone's ass and plead for money from a label that, in turn, has corporate considerations above all others.

Nobody can afford that anymore. When Kaiser Chiefs complained about being the third band to play their new hometown arena, it led to Ricky Wilson having to delete a Tweet and suffer through the indignity. In a time of dissent, Wilson would have been able to make a statement and hold to it. You cannot blame him or the band for having to hold their tongue--they literally could not survive without that show at that venue and without future shows.

Our new reality comes with a price, and the removal of dissent from music has removed the excitement and the immediacy.
- July 10, 2013