Yes, Nickleback is Really That Bad 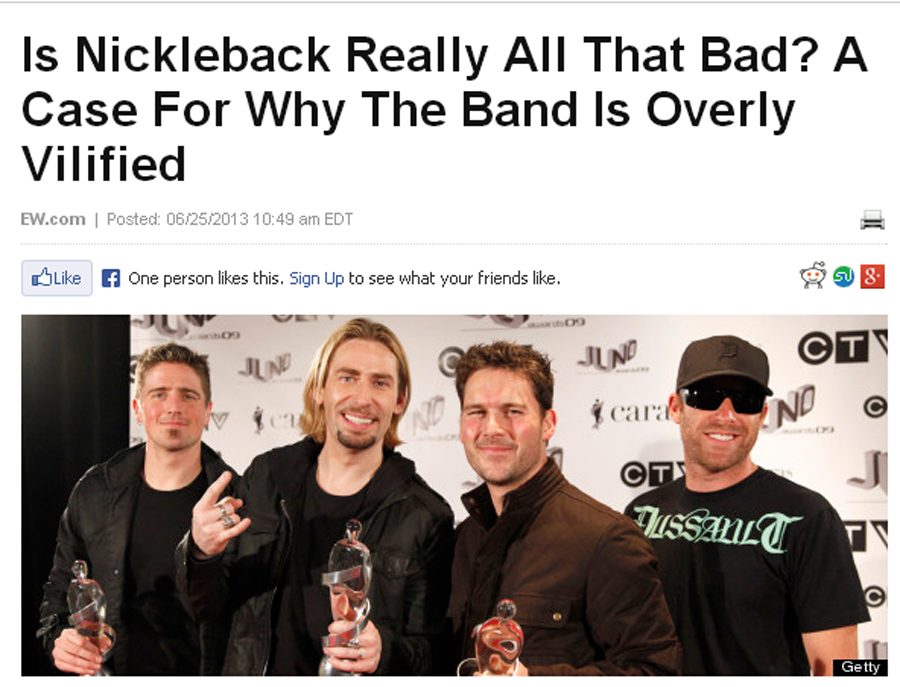 Nickleback is a lame band.

Throughout the music world, you cannot escape the perception of Nickleback as a band that is hated almost solely because of the inherent lameness of their music and the lack of anything that would change the minds of people who hold that position.

There are two parallels to this. You cannot change the impression that Foo Fighters are the anti-Nickleback even though there are times when people can't tell the difference. If you slice out bits of music, I would be willing to bet that there are people who couldn't tell them apart. And you cannot change the fact that people respect Radiohead as being a difficult, arty band. If you gave music fans a choice between verse-chorus-verse and crackle-snap-glasssy whoosh and then aw-uhh, what do you think they would choose, en masse?

Radiohead sell a lot of records, just like Nickleback, but do they get played? Or are they status symbols?

Magazines and critics can argue about who is cool and who is not cool all they want. When the fans of music reach a general consensus, there isn't much that will reverse that. In 1965, Herman's Hermits outsold the Beatles. If you were a working historian of popular culture, you might begin the academic argument that the popularity of the Beatles actually faded when they became experimental and that their appeal shifted considerably when they split up. What has elevated them above all others are fans who insist on doing so and the music publications who spent the 1970s and 1980s cementing their legacy.

Reality need not apply. You cannot prove someone and their band sucks; you have to rely on the unfair and unflattering perception that has been attacked to said person or band.
- June 25, 2013