Newspapers Can Say Anything and Get Away With It 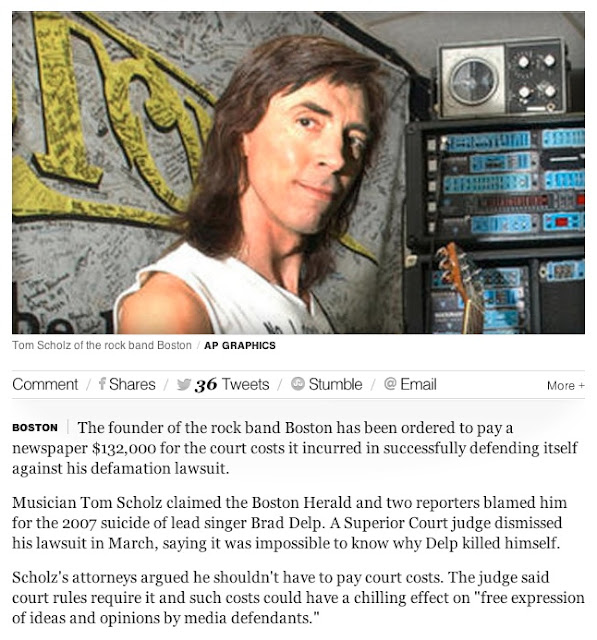 Tom Scholz has lost his case against a newspaper called The Boston Herald and two of the people who write for the paper. This is one of those times when I wish that someone had been able to hold a media outlet accountable for printing unsubstantiated allegations and outright lies.

In 2007, singer Brad Delp killed himself. Here's the story on that:

Boston singer Brad Delp installed a hidden camera in his fiancee’s sister’s bedroom – and killed himself nine days after he was caught.

Evidence given in the court case between Boston mainman Tom Scholz and a newspaper revealed how Delp, who committed suicide in 2007, was ashamed and apologetic after his spy device was found.

Events came to light as part of Scholz’s claim that the Boston Herald defamed him by suggesting he was to blame for his bandmate’s death.

Delp was engaged to Pamela Sullivan while her sister Meg Sullivan lived in the singer’s house. His relationship with Meg was described as “platonic”.
But in February 2007 she discovered his battery-powered spy device when it fell from its hiding place. She confronted him about it then went to stay with her boyfriend.

Delp emailed her to apologise, saying: “I feel sick about this, and deservedly so.” He later added: “I want to try and make you understand that I consider myself a decent person who made a dreadful error in judgement. I acted out of some impulse that is still not completely fathomable to me.”

But her boyfriend, Boston sound engineer Todd Winmill, ordered him to tell his fiancee what had happened. “He essentially apologised for half an hour,” said Winmill. “I told him he had to tell Pamela. He didn’t like the thought of having to do that.”

Delp later took his own life by lighting two charcoal grills in his sealed bathroom, leading to his death by carbon monoxide poisoning. In one of four notes he wrote: “I have had bouts of depression and thoughts of suicide since I was a teenager.”

Now, remember. The Boston Herald printed a story in 2007 claiming that Tom Scholz was to blame for Delp's suicide. They claimed that Delp was "beaten down" because of his dealings with Scholz but you can clearly see in his suicide note that he had thought about killing himself for most of his life.
So, after all of this tragedy, when the real story came out, was the newspaper held accountable?
Hell no.
If that's not a travesty of justice, then what the hell is a travesty of justice anymore?
- June 29, 2013