Why Do I Know These Things? 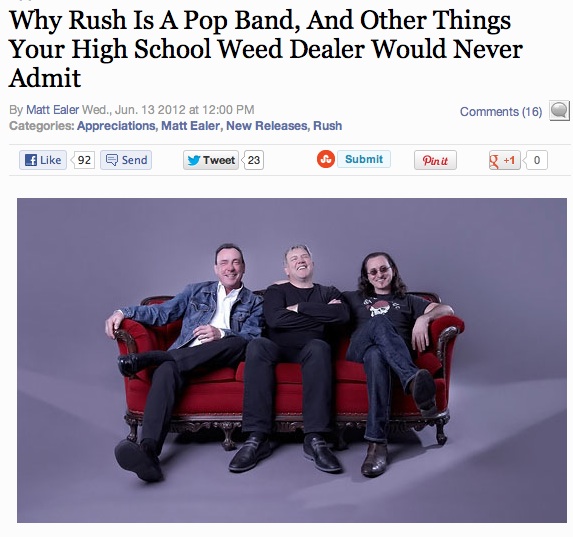 This is a poorly constructed review, and what is evident is that the reviewer looks at the Rush catalog in chronological terms. This is the wrong way to write about and understand the band.
Rush is not a pop band. Rush is a band.

The first few eras can be summed up by simply dating their double-live LP releases. All the World's a Stage concludes the early period, putting a note of finality on their development from a cover band to a working bar act and the addition of Neil Peart on drums. Peart wrote the lyrics because no one else wanted to; the lyrics from the first Rush album were written in minutes because original drummer John Rutsey bailed on completing them.

The band traveled to England and made A Farewell to Kings, beginning a creative period that would conclude with Moving Pictures. This was the era that firmly established a progressive rock foundation, complete with killing that beast off by insisting on shorter songs and arena-friendly tours. There is almost nothing that relates this period to the first period of the band; these albums are technically and sonically more advanced and adventurous.

The third period of the band centered around synthesizers and keyboards; From Signals to Hold Your Fire, the guitar struggled to be heard but the proficiency of the band reached new highs. It would be foolish to relate anything that happened in this period to anything the band had done before; when they convened to make Signals, the band went so far as to reconfigure their equipment setup in the studio in order to break with the past. A lot of fans abandoned the band during this era.

1989's Presto kicked off a fourth period of creative flux for the band, coming after a badly-needed break from touring. The songs on Presto, Roll the Bones, Counterparts, and Test For Echo are decidedly more adult and more personal. During this period, the band toured the world multiple times and enjoyed enormous success, despite critical indifference. This period is not well understood or remembered, and, once again, nothing made during this period has anything to do with the previous three eras in the band's history.

The "break" that occurred from 1997-2002 was the result of a serious personal tragedy. Rush fans understand this, and regard everything that has happened since as one long celebration of the band simply being able to play, record and tour again. Despite the sluggish sound of the band getting underway in 2002, they have evolved and progressed into a formidable touring machine. The opening onslaught medley of the Rush R30 tour (R30 Overture) is a tour de force no progressive band has ever bothered to attempt to match.

Is this new album the start of something new? Who cares?

The main question is, why would you bother reading a Rush review in the Village Voice?
- June 14, 2012