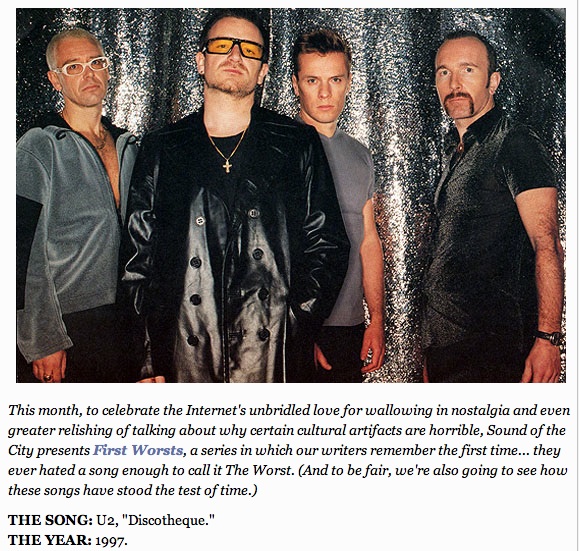 Here's me--a U2 fan (although one frustrated with everything they've done for the last 25 years) and a great, great post at the Village Voice. I feel like I'm wading through a cess pool of what's wrong with me and why I'm lame. Oh well.
I don't think you can write about U2 without first acknowledging the enormous mind-f*ck that The Stone Roses put on U2 when they emerged in 1989.

Fresh off the commercial and critical disaster of Rattle and Hum, U2 had to sit back and watch the Stone Roses capture the hearts of the people who loved the kind of rock and roll they were championing in the British Isles. Owning America was never in the cards for the Roses, but U2 had always been a European band with a European sensibility. The only thing challenging them was the funky beat of Fool's Gold.

Without that challenge, there would have been no Achtung Baby or a left-turn into bass-driven dance music (funny how no one remembers Zooropa and the Lemon single). And so, Discoteque arrived after the Roses had faded from view and U2 were allowed a moment to contemplate the future.

Pop is the sound of a band that has no idea what to do with itself because giving a crap was flushed from their DNA along with their original intent to make music that mattered. What chased away the original idea of U2 was that Manchester baggy sound.
I think the reason why I'm lame is that I still like old U2 and I understand the context of their stuff in relation to the explosion of the Manchester music scene. There is a solid book out there, waiting to be written, about how the Stone Roses kicked the psychic ass of U2 and changed them into an arena-filling, don't-give-a-shit-no-more megaband, but I'm not going to write it.
- June 12, 2012