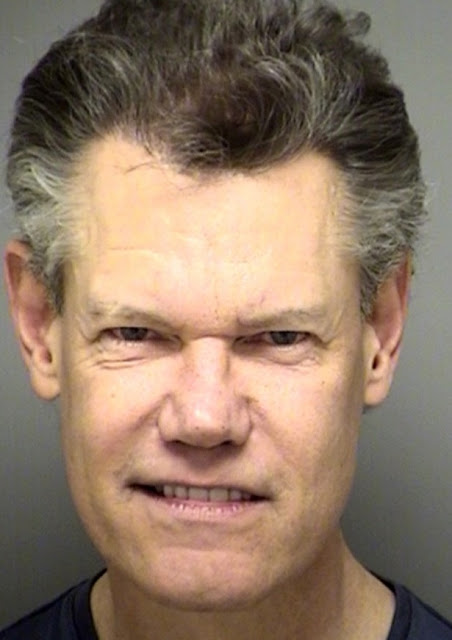 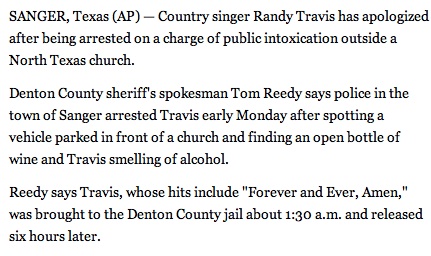 We never talk about country music on this blog, and I think this is a good time to post on something that actually has its roots in rock and roll and youthful rebellion.

When you think of Randy Travis, you're probably thinking that here's a down-on-his-luck country music star who is getting in trouble with John Law again, shades of Merle Haggard or Willie Nelson. Well, it's a little more complicated than that, and, when it comes to musicians, it's never as cut and dried as people would like to make it seem.

Last year, Travis ended his marriage after 19 years. Was that a factor in his "celebration" of the Super Bowl? I don't know. But Travis is not your typical country music star. He's a crossover artist who does a lot of work in the gospel genre, so there are a lot of profound elements at play here. And those elements come in the way of soul searching and trying to find answers. He has sold millions of records and won shelves full of awards. I think it is safe to say that he resides in the top tier of country artists, but that his best days might be behind him. Who can really say for sure, though?

Country artists are not as disposable as pop artists, and they have careers that are similar to what independent artists often have. They have long, durable careers of respectable or sustainable sales while touring and performing in smaller venues. I don't think there's a better comparison than the sustained career of a country artist and that of an independent artist who might play rock and roll or roots rock. Their fans and the loyalty they have for these acts keep them on the circuit.

Anyway, this does lead to a little speculation and introspection. In his younger days, Travis was pretty reckless and rebellious. He had numerous offenses as a juvenile and as a young adult. He was discovered when he won a talent contest while dodging the law and trying to get his life on track. He has had a massive career, and now he appears to have hit a rough patch.

Whatever comes next is interesting to me. I'm naturally interested in how people deal with adversity and go on to create things. I'm also interested in how things fall apart, how people put things back together. Deconstruction is another thing that country artists have in common with their more independent brethren. They like to break things down and think about things when they make music.
- February 06, 2012