The Replacements The Shit Hits The Fans Cover 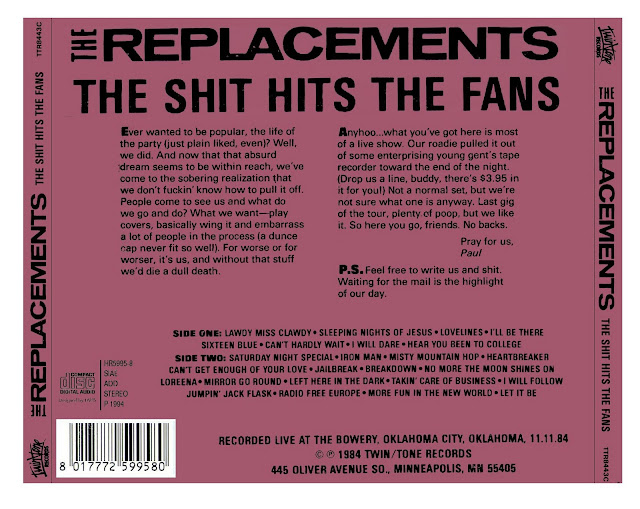 I believe that I first saw this as a cassette release, and I was an unimpressed then as I am now with it. Well, impressed is the wrong word. I love the Replacements, but I wish they hadn't evolved into a joke that collapsed in on itself.

This is the essence of the "hey, let's fail" side of the band (never mind that the "hey, we need to remix this album so it'll sell" side emerged just a few years later) just before they threw Bob Stinson out of the band for being one of the four members of the band. No American band ever worked harder at sabotaging itself than the Replacements. Many tried, but few achieved what this release represented--one drunken night playing whatever song they could remember. Who, in their right mind, would segue from "Takin' Care of Business" to "I Will Follow" to "Jumpin' Jack Flash" to "Radio Free Europe?" I could never figure that out. That's pretty much the history of rock and roll right there.

Anyway, this is the Twin Tone CD release. I don't know if the quality improves on CD. It was fine on cassette, and it was great to hear it about once or so.
- November 08, 2011