A Gallagher Too Far 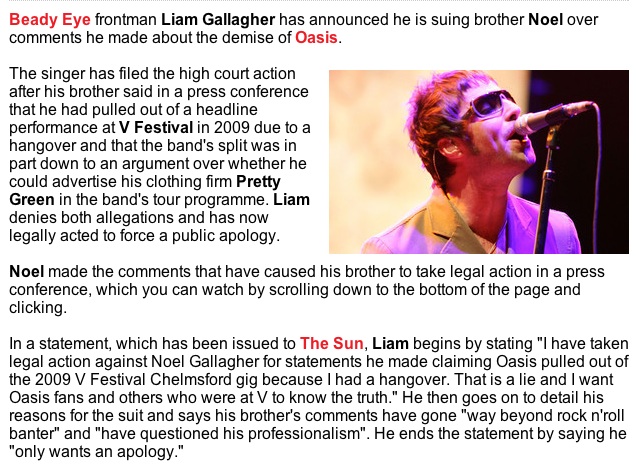 You don't sue for an apology--you sue for damages. The legal process is not the place one goes to in order to soothe hurt feelings--the rule of law works in the other direction. When your feelings are hurt, lash out or find comfort in art or through a statement to the press. Suing in an austere court puts you in the realm of barristers and lawyers and men who take millions from other men over trifles and contract disputes.

The real story here is that older Noel has tormented younger Liam through the press this summer and now young Liam has to lash out any way he can. The music press in England is almost entirely on the side of Noel so what else is Liam supposed to do? Liam has overreached. He has gone to the courts and made himself look like the nervously twitching innocent. And, by innocent, I mean the naive sort.

What's behind this torment? Well, the Beady Eye album landed and it didn't take off quite like it was supposed to. Was it a failure? No. But it was no second coming of anything. Has that unsettled Liam? Does anyone care?

The pending release of the Noel Gallagher album is another animal entirely. It could be a huge hit or it could be merely fantastic. There's a lot of buzz out there about it, and there's a lot of hype. All of this is hype, of course. Both Gallaghers have the same management. And why is that?

Does that make it easier to coordinate the public relations efforts? Does that mean that one client of this management company is suing another client for an apology only, and no monetary damages for a reason? What is that reason?

Well, it was worth a blog post. Did it make anyone care? Did this make people sit up and take notice of a product that they could buy? Was it worth the time to file the law suit? And a few stories across the web? Hopefully, that will shift a few units.
- August 19, 2011