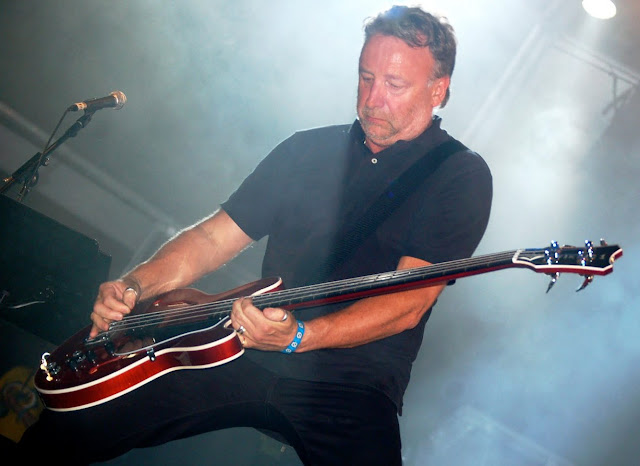 I don't know if this will settle anything, or reopen old wounds, but Peter Hook has spoken out in the Guardian about the loss of Ian Curtis:

We didn't have much money; we weren't eating properly and couldn't afford to drink. We played three nights at the Moonlight club in West Hampstead and supported the Stranglers at the Rainbow – four gigs in three days. Ian's illness was getting worse and we didn't help him, through ignorance really. But also, Ian was his own worst enemy – he never wanted to upset you, so he'd tell you what you wanted to hear. So we never knew what he was suffering or thinking.

He made two unsuccessful attempts. First, when he was really drunk, he self-harmed – chopped himself up with a kitchen knife, which I think was an Iggy Pop moment out of sheer frustration. Then he took an overdose. Tony Wilson, the boss of our label, Factory Records, brought him to rehearsal – straight from the hospital, I think. We'd ask: "Is everything all right, mate?" and he'd reply: "Yeah, fine, let's carry on." As an adult and a father now, I feel guiltier than I ever did then. If that had been my son, I'd have gone round there and headbutted Rob Gretton, our manager, and taken him home. But there were doctors, consultants, psychiatrists, and not one of them was able to sort it out. Unbelievable.

Rob had booked a gig in Bury. Ian decided he couldn't do it, but for some insane reason he was delivered to the gig, even though we'd arranged for Simon Topping and Alan Hempsall to stand in for him. Ian insisted on doing a couple of songs, and when he couldn't do any more the audience rioted. That destroyed him. Then our last gig in Birmingham was a grim affair. Ian's illness was dragging the whole thing down, but we'd spent three years going from playing to no people in Oldham to being revered. It was what he'd fought for all his life. None of us wanted to let it go. We all felt that if we stopped we might never get it again.

At some point, Hook might need to reconcile with his former New Order bandmates. Let's hope that this article of his opens up some channels of communication, rather than closes them.