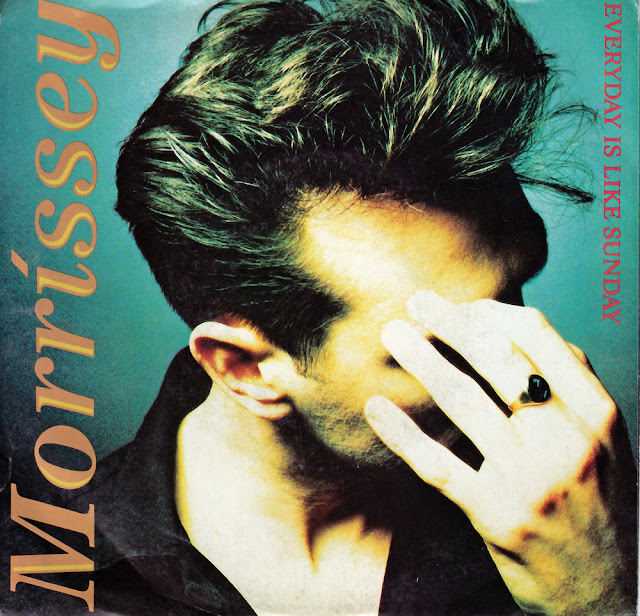 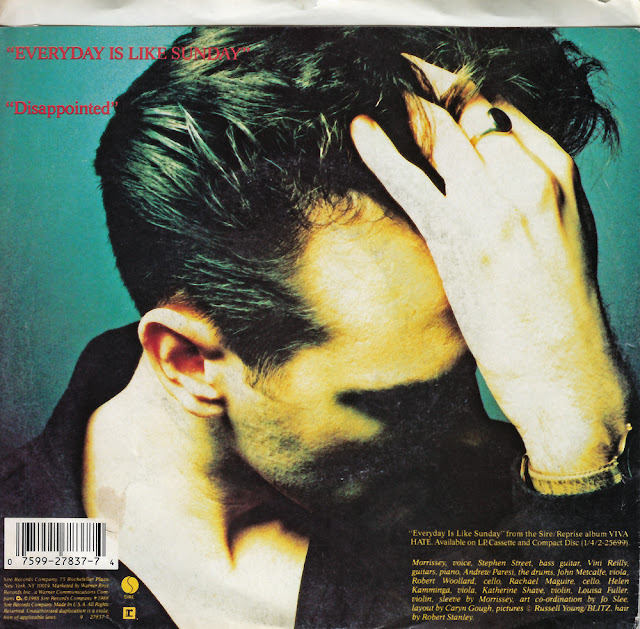 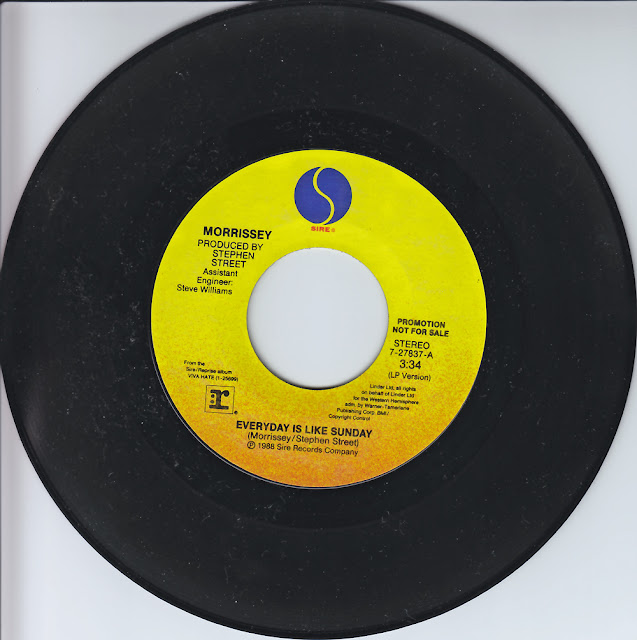 By the late 1980s, Ian McCulloch had an impressive roster of blood enemies. McCulloch was forever making comments about other artists, and one of those artists was Morrissey.

I dug out this sleeve to show how brilliantly the images tell the story of the song inside. In a few months, perhaps only a year, 45rpm singles would disappear entirely, replace by CDs. This is the last gasp of the vinyl single (which has somewhat been resurrected, of course).

All of the years of packaging and selling 45s to kids culminates in this package. After this, the art departments of the major labels would have to switch to a much smaller format. In actual size, I would be willing to bet the image is better on the 12" single, which was my favorite format.
- February 27, 2011 No comments:

Aztec Camera Somewhere in My Heart 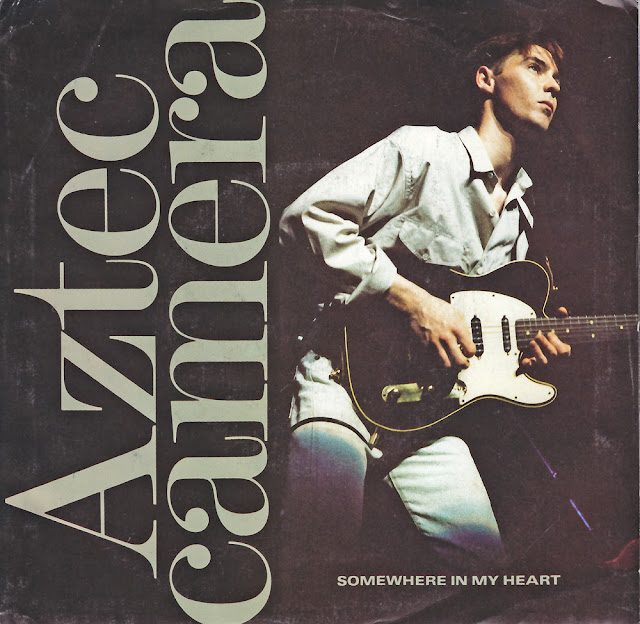 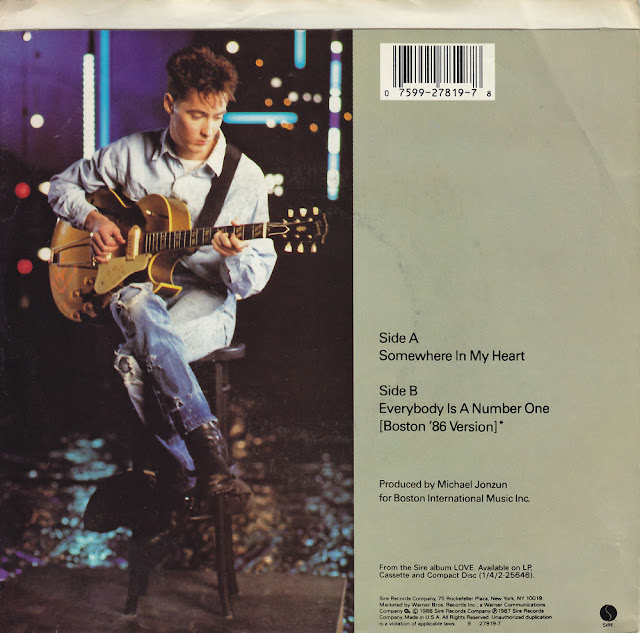 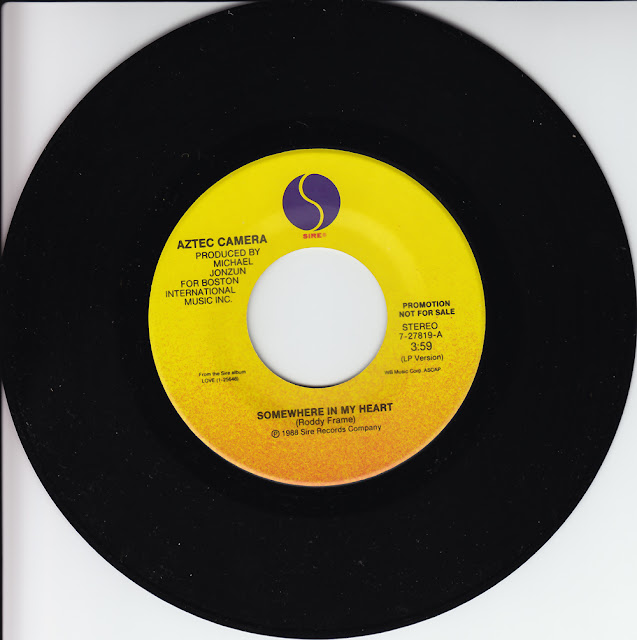 The art direction on this single has a bit of an "Echo and the Bunnymen" feel to it, and I would suspect that whoever was working in the art department for Sire Records in the mid-1980s worked on, or had a bit of influence over, the work done for both bands.

The Damned Alone Again Or Single 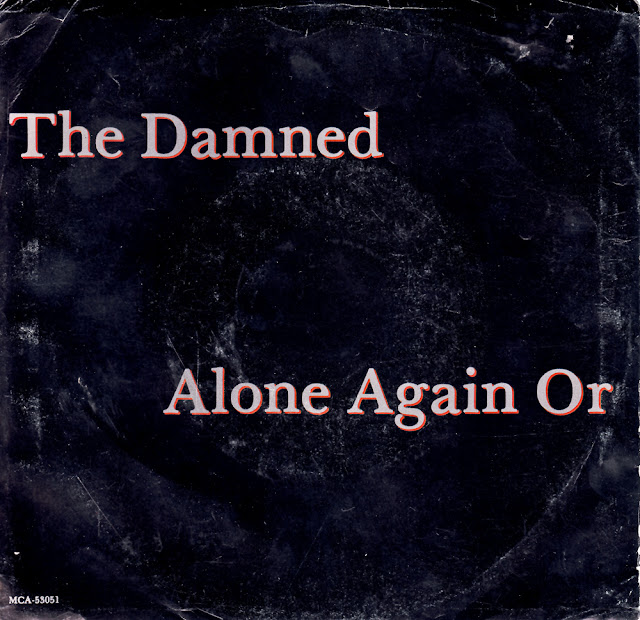 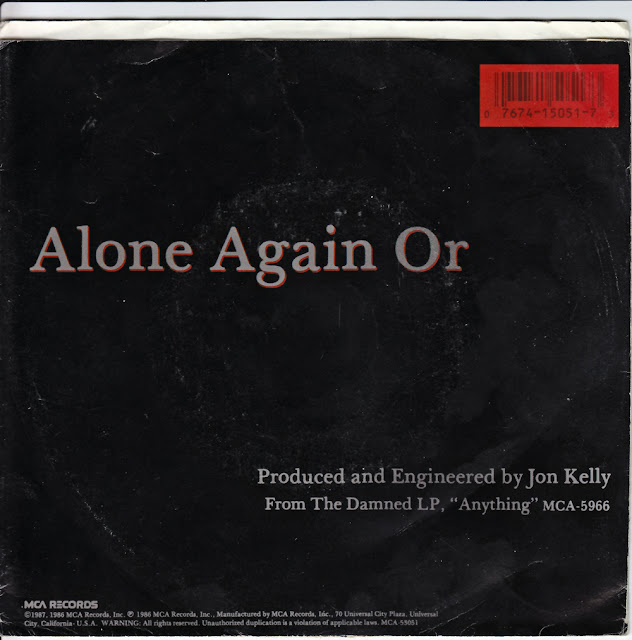 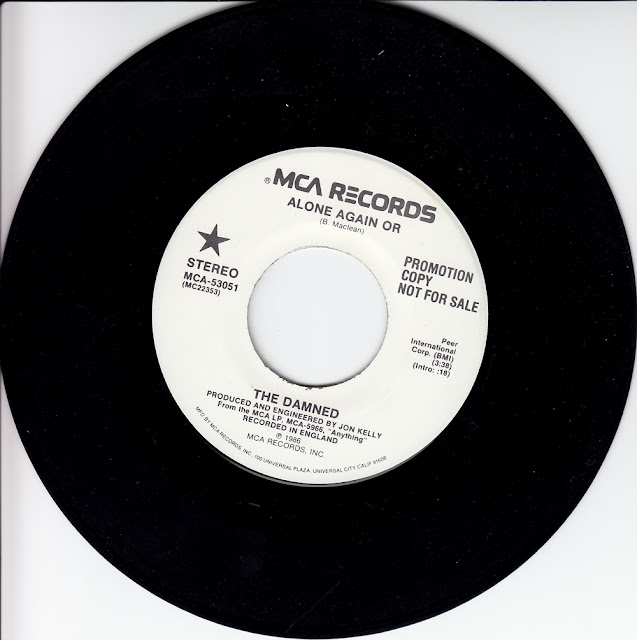 The Damned had a "goth" period, and I suppose this single didn't really fit into it. I think the "Anything" album was more of a pop album than a goth album, but it was a great album, nonetheless.

This single was a cover, and the understated sleeve works well here. The Damned were roundly criticized for the album, but it has always held up for me.
- February 24, 2011 No comments: 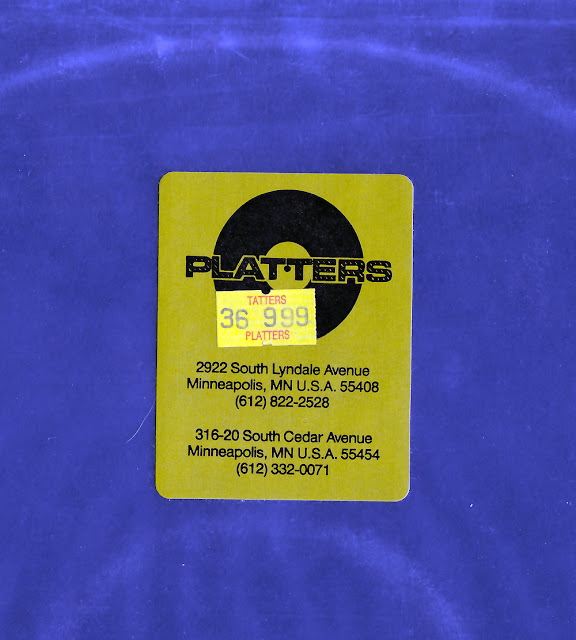 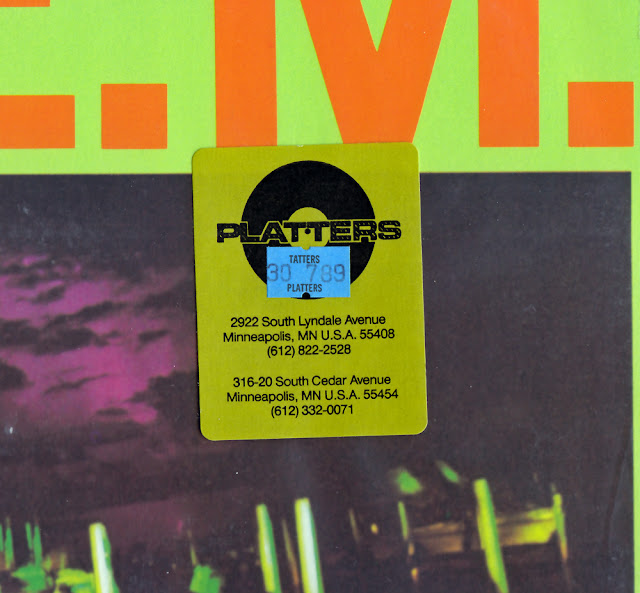 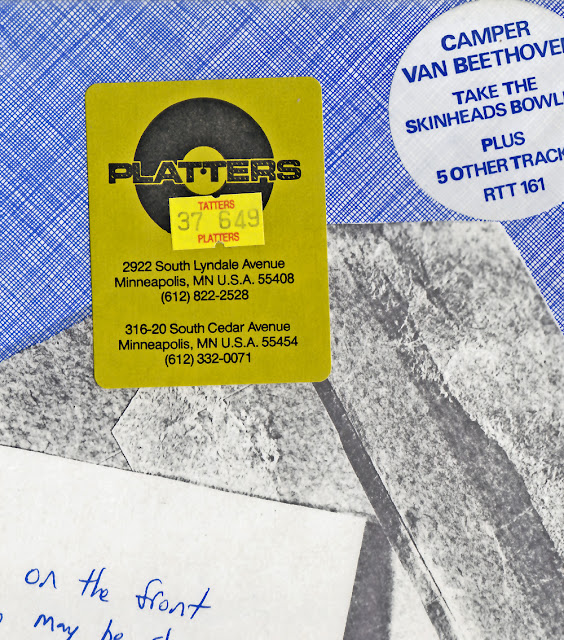 Scattered throughout my old collection of vinyl records, there are still the vestiges of by-gone record stores. There's a Garage D'or sticker, a Down in the Valley sticker, and a handful of stickers from Platters and Tatters.

Someone knew how to market things back in the 1980s and 1990s, because these stickers still look fabulous. They were all affixed to the outside of the cover of the 12" singles that I had purchased; it would have been considered very bad form to put the sticker right on the cover of the physical item itself. The pieces in question come from singles released in 1987 and 1985 (or thereabouts), so they have held up well.

Note that there is definitely a distinction between the "platters" side (records, duh) and the "tatters" side (used clothing). I suspect they also sold new or remaindered clothing, but I could be wrong on that. Basically, you could buy a record and a new outfit, and that would get you through the week.

How the heck did they go out of business? If they were open today, I would be willing to bet you just the right number of hipsters would show up on a steady basis to keep them in business. I'm not saying it would be easy, but who wouldn't want to find a few treasures, all for the cost of a few bucks and a quiet afternoon?
- February 22, 2011 3 comments:

Tatters and Platters was a record store and clothing store that, apparently, no longer exists. Some of their ephemera is still out there: 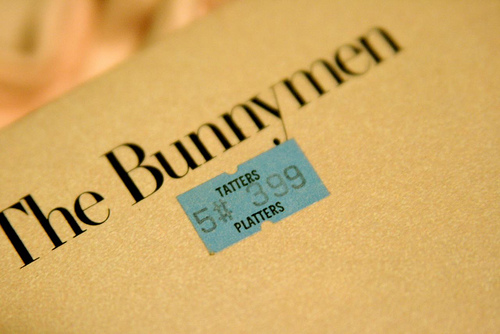 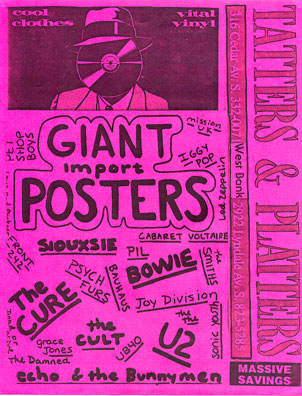 I will have a look and see what else I can find. These two images popped up, and you cannot help but notice how prominently "Echo & the Bunnymen" features on both of them.

Tatters and Platters was where you could go to acquire the "navy surplus" coats that sort of go with the look you see here: 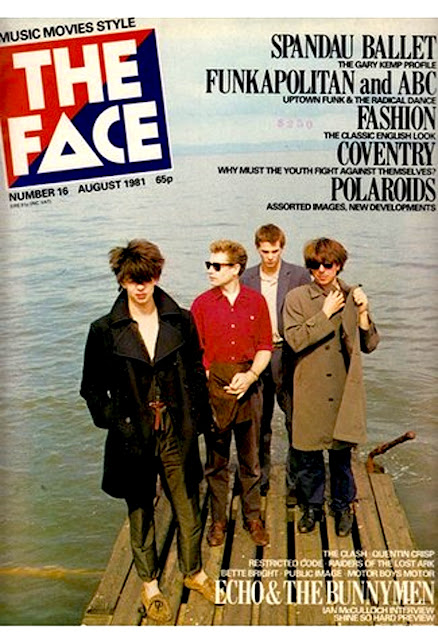 The heavy black "navy surplus" coat was a popular favorite at "Tatters and Platters." How important was this? Not too overly important, but this is what I am nostalgic for.
- February 20, 2011 3 comments:

This is Not About What You Think It's About


I was maintaining one of my domains on this thing they call "GoDaddy" last night and I went hunting for unclaimed gems.

After twenty or thirty frustrating misses, because everything is already taken, I typed in "The Killing Moon" and the image before me went green, and became very inviting. You know how GoDaddy sells this stuff. They can have you checking out with fifty domains in mere minutes if you don't have the intestinal fortitude to walk away from the computer. I filed it away in the back of my mind since this was a fishing expedition for things that might work (and there are few that ever do). What would I do with "thekillingmoon.com?" In my mind, it was entirely associated with the song of the same name by Echo & the Bunnymen, a song which I revere and have always put up there with the greatest ever made.

Echo & the Bunnymen were more than a mere post-punk romantic-era 1980s band. They made brilliant albums, fell apart, came back together, and have continued on despite tragedy and loss. They are quite a rare commodity in the music business, which is falling apart as we speak. Their current works are as artistically relevant and viable as their earliest works. They have few, if any, real peers.


I didn't register the site at all and I logged off and did other things.

What on Earth would you do with that? I asked myself. It's like trying to touch liquid nitrogen--no good could possibly come out of it (you can have "touchingliquidnitrogen.com" if you want).

The questions began. I was bothered by what I knew, which was, in all of the years of registering and putting up domains on the Internet, no one bothered to pick up what, I think, is the coolest title of all. There was a novel by the same name. There was (and even, perhaps, still is, at least one band with the name). There are blogs out there and I'm wondering how many Echo & the Bunnymen fan sites there are with some take on the name. I mean, talk about a "no shit, there I was..." sort of moment. How could I ignore it? How could I not seize it and take it and do something positive with it.

You could park on it and auction it off. Never.

You could make it about the song. No, it's not my song. It would be wrong to do that. But, I have to acknowledge the debt that the world of music and art owes to the song, which is brilliant.

You could keep others from abusing it. Well, who am I to do that? Just by registering the domain and doing what I'm doing, I'm ruining it for fans of the song (I hope not, but oh well).


You could take the title as inspiration, and do something worthwhile. Well, that's what I have settled upon.


The title, then, is the starting point for looking at art, music, and the culture where it landed, circa 1984, which was a terrible year for pop music (no, I won't slag anyone). The people who follow romantic and goth music and culture have exquisite taste. I am bound to disappoint, but who could live up to such a song?

My point of reference is based in the American Midwest. I think of the look and feel of the song as being something you would pick up at "Tatters and Platters," and if you want to know more about that, stay tuned.
- February 20, 2011 No comments: